Even though fans’ hearts end up in their throats when Russell Wilson runs, he knows the risks, and goes out of his way to avoid them. Bills Sunday never tackled him on a run. 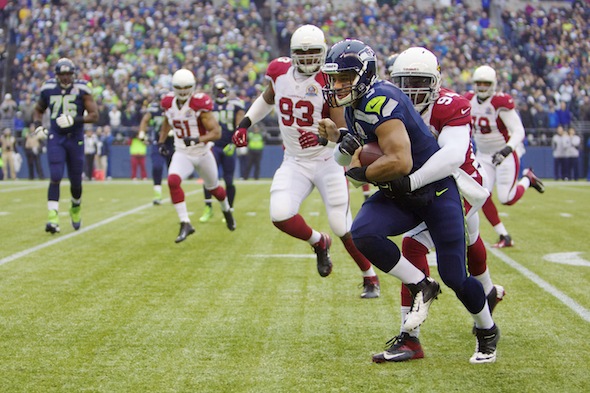 An increasingly rare photo of Russell Wilson getting grabbed. When he ran against Buffalo Sunday, the Bills never tackled him. / Drew Sellers, Sportspress Northwest

Peeking through my fingers at the infected blister of the Monday night TV game between Tennessee and the New York Jets, I saw something other than wretched pro football. I saw what Pete Carroll was talking about.

Watching Titans quarterback Jake Locker, the former Huskies’ stalwart, bravely flinging himself, upper body first, into Jets tacklers, it was easy to imagine the Seahawks coach pulling together videos of Locker’s rushes, followed by a lecture to his quarterback, Russell Wilson:

Carroll: “If you ever run like this, I will take away your starting job, your shoes, your helmet and your booster seat. That’s my deal.”

For fans equal parts thrilled and scared when the Seahawks rookie out-swivels the rush and breaks downfield toward the arms of large, sweaty men angry with him, Wilson, according to Carroll, seems ideally suited to survive the read-option part of the offense that has had such resounding success lately.

Wilson has passed through the macho imperative of the NFL and has come out the other side more mature than many of his contemporaries. Not to mention intact.

“He won’t run (the option)  again if he starts running up in there sticking his head in there trying to run over linebackers,” Carroll said. “That’s been made clear. He gets it.”

To prove the point, Wilson, who dazzled Sunday in the Seahawks’ 50-17 mashing of Buffalo with his first rushing touchdowns of the season — three in the first half, a Seahawks QB record — did something even more impressive than rushing for 92 yards in nine carries:

He was never tackled.

The Everett Herald’s John Boyle reviewed Wilson’s nine rushes and saw that the rookie scored, ran out of bounds or slid and was touched down. He was never hit when he chose to run.

“He’s a very mindful, very conscientious kid about his position and his role in the offense.”

Unlike other rush-minded QBs such as Locker, Michael Vick and even fellow rookie Robert Griffin III, Wilson appears to understand that his continued good health and availability makes the Seahawks better; thus, avoidance of collision is not equivalent to an absence of manhood.

Wilson said so after the game in Toronto: “I don’t want to hurt the team.”

For years, conventional NFL wisdom was that the read option, long popular in the college game, would not work in the pro game partly because defenders were faster, but mostly because QBs were too valuable to take the risk of running the ball as much as option QBs do in college.

“The main criterion goes back to not wanting to get your quarterback hit,” Carroll said.  “But it’s also (finding the) quarterbacks that are suited to do it. When it’s
as open as it gets sometimes, any quarterback can take off and make you 15 to 20 yards or so. When you have a guy that really has the quickness and the background to do it, it becomes a bigger option.

“When Vick was in Atlanta, he kept the ball a lot. I think he pushed the envelope more, and got hit more. They had some huge running years there. So it’s been around longer than just recently.”

In this part of the offense, Wilson’s absence of height is an advantage instead of an hindrance. As a ballcarrier, he can stop quicker and start quicker than bigger defenders, reducing the chances he will be caught from behind. If all he has to worry about is what’s ahead of him, he can choose to go down or over to a sideline.

Unless he can prove he is radioactive, it’s not going to work all the time. Then again, what does?

A QB doesn’t have to be 5-11 to get away with it. As Seahawks fans will witness Sunday when San Francisco comes to town for a much-anticipated match, the 49ers’ new quarterback, Colin Kaepernick, is 6-foot-4 and 220 pounds. Yet since taking over for incumbent Alex Smith, he appears to be nearly as adroit as Wilson in the latest trend in NFL offenses.

“Kaepernick is just great at it,” Carroll said. “He was a record-setting guy in college football (University of Nevada). He’s got great background in it. They put it into their offense to threaten you with it often.”

As with the 49ers, the Seahawks’ adoption of the read option came in the middle of the season as Wilson proved he was wise enough to seek safety instead of the extra yard, and the Seahawks were wise enough not to give him the ball at fourth-and-goal from the one-yard line.

“It’s been about six weeks that we’ve been messing with it, more so lately, and it’s becoming a big part of the offense,” Carroll said. “Russell is getting better at it, the linemen are getting better at blocking it.  Running backs as well.  Hopefully, we’re complementing it well, so we make it hard enough for them so they can’t just zero in and take it away. The Chicago game really kicked us into high gear with it in the closing part of that game.”

When the Seahawks lost 13-6 to the 49ers Oct. 18 in San Francisco, Wilson had his worst day statistically (9 for 23, 122 yards; 3 rushes for 10 yards). Part was due to five dropped passes, and part was due to the absence of the read option.

Since the 49ers defense is a considerable upgrade from those of Arizona and Buffalo (think Albania compared to the old Soviet Union), Wilson is unlikely to come away un-mussed. But upright would be good.

“I think it’s hugely important,” Carroll said. “I think it’s part of us trusting to continue to work it. He knows the necessity of getting out of those plays without taking the big hit. He shouldn’t pull down the ball (and run) unless he’s got a lot of space. He didn’t get it right every time, but it’s really important for the longevity of that aspect of the offense.”

At 24, Wilson is among the first in his generation of players who realize that surviving to the next play is a more virtuous thing than getting to the next yard. Jake Locker, please take a note, while you can.