If being down 14 points on the road in front of 85,000 people isn’t going to muss Russell Wilson’s feathers, it seems time to drop the rookie label and starting using “savvy vet.” 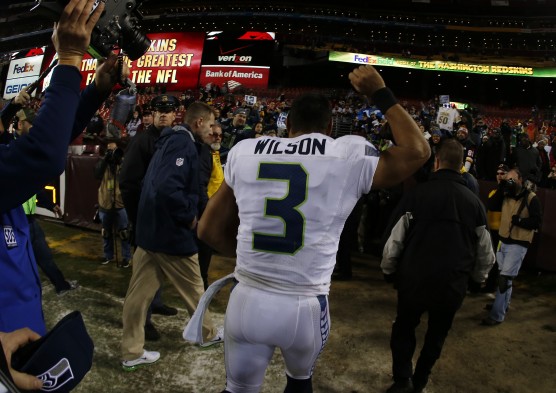 LANDOVER, MD. — Down 14 points at the stomping feet of the largest playoff crowd in the football history of the nation’s capital, while attempting to do something a Seattle team had not done in 30 years, the conclusion was plain:

The Seahawks had the Redskins right where they wanted them.

That was not apparent to many, maybe even among the Seahawks. Except for one guy.

“It is a little weird,” said Seahawks fullback Michael Robinson. “To keep his composure in this wild environment, first playoff game for him and all . . . it’s just weird.

“But Russell Wilson always does it. I’ve seen veteran, older quarterbacks crumble and crack in the same situation. Not him.”

Wilson and the Seahawks ran the table. Sucked the air out of the building. Broke with their history as well as the hearts of of 84,325 burgundy-clad howlers at FedEx Field who audibly embraced the first Redskins home playoff game since 1999. Only to see the Seahawks — the no-pedigree, no-status, no-cred Seattle freakin’ Seahawks — kick them out of the playoffs for the third time in seven years, this one 24-14.

With the rhythmic, patient pounding of a blacksmith, the Seahawks put up 24 points in a row on a team with a seven-game winning streak, who on a chilly evening were no match for the steady heat.

Or as Pete Carroll put it, “They were kicking our butts, no doubt about that. Then they didn’t.”

While the self-obsessed Washington crowd anguished over the injury fate of their valiant hero, rookie quarterback Robert Griffin III, and the wisdom — if any — deployed by coach Mike Shanahan to persist in keeping Griffin in harm’s way, the Seahawks showed precisely how to win a road playoff game.

They stuck with a game plan that featured RB Marshawn Lynch (132 yards in 20 carries), allowed Wilson to be Wilson on his unscripted gambols from the pocket (67 in 8 carries), and offered patience to a well-regarded young defense that, truth be told, wasn’t ready for the atmosphere of the postseason road.

The kid defenders proved adept learners. Surrendering only 74 yards of total offense over the final three periods, they actually finished below their average of 15.9 points allowed that led the NFL.

“That is ridiculously good defense,” Carroll said, and history backed him up. Only the 1957 Detroit Lions and 2003 Philadelphia Eagles have won playoff game despite being down 14  to start. And it helped erase some stigma in the Seahawks’ own annals. The triumph broke a string of nine consecutive road losses (counting the 2006 Super Bowl defeat) in the postseason dating to 1983.

But it was the steadiness of the human dial tone, Wilson, that kept the Seahawks moving on in the playoffs to Atlanta Sunday in the divisional round.

“I kept telling the guys we’ve been here before,” Wilson said. “It’s no different.”

In truth, it was different, beyond being in the playoffs. The careful-as-a-hospital-premie- ward Seahawks blew some chances. In previous wins, they finished off the Bears and Cardinals with some late-game perfection, and blew out Buffalo, Arizona and San Francisco. This time, they dropped the ball — twice.

Lynch, one of the most reliable rushers in the game, fumbled on the 2-yard line as he approached the end zone. The Redskins recovered. In the second quarter on first-and-five at the Seattle 45, he and Wilson messed up the handoff on a read option — a common development that has helped keep the play out of pro football.

But this time, Lynch bailed out his teammates with a play that will rank among the great rescues in club history. As the ball was batted along the ground, Lynch alertly peeled back and instead of pouncing, kept his feet, scooped up the ball and blew past the disorganized Washington defense for a 20-yard gain. That led to Seattle’s first touchdown.

“That was one of the best plays of the game,” Wilson said, beaming. “That was big time. He had my back right there.”

The Seahawks’ resourcefulness probably will be a little lost in the controversy over Griffin, whose play after the first two Washington touchdown drives deteriorated as the game went on. Shanahan declined to take out his starter, even though his backup, fellow rookie, Kirk Cousins, had demonstrated competence.

“Robert said to me, ‘Coach, there’s a difference between being injured and being hurt,'” Shanahan said during a barrage of post-game questions. “He said, ‘I can guarantee I’m hurt right now, but give me a chance to win this football game because I guarantee I’m not injured.’ That was enough for me.”

It was too much for Griffin, who finally was forced from the game in the fourth quarter as his knee twisted awkwardly after a low shotgun snap escaped him. He walked off on his own, then stoutly defended post-game the decisions that allowed him to keep playing, even though he was merely a pocket quarterback with little of his trademark explosive speed.

The Seahawks will leave behind the arguments about manhood, wisdom, safety, gallantry and foolishness to be sorted by Griffin, Shanahan, doctors, columnists, fans and those charged with moral righteousness (presumably that means in this town a Congressional inquiry).

The Seahawks have more formidable feats to manage. In Atlanta Sunday, they will face the NFC’s No. 1 seed, the 13-3 Falcons, who had their feet up watching the Redskins and Seahawks Sunday, beneficiaries of a first-round bye.

The Falcons won the last three regular-season season games against Seattle, including 30-28 on Oct. 2, 2011. But the teams didn’t play this season, which means that all the previous history between the clubs is mostly piffle.

“We have to go to Atlanta and play a great game,” Wilson said simply. They’ve been doing that a lot lately; home and road, outdoors and now indoors in Atlanta, ahead and behind.  It’s largely thanks to the weird guy, the last rookie QB still in the tourney and — who knows? — maybe the best man still standing.