Atlanta Falcons coach Mike Smith has a healthy respect for Seattle’s defense, which allowed the fewest points (245) in the NFL during the regular season. 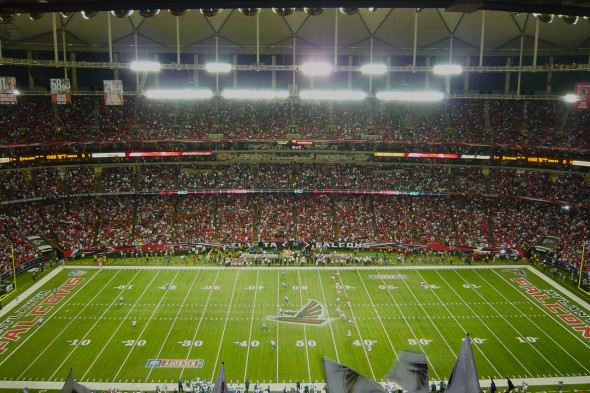 The Seahawks will face the No. 1-seeded Atlanta Falcons Sunday in the Georgia Dome. Seattle is a 2½-point underdog. / Wiki Commons

In his mid-week press conference Wednesday, Atlanta Falcons head coach Mike Smith spent an inordinate amount of time talking about the strength of the Seahawks’ running game without saying exactly that the key for Atlanta Sunday is stopping it. Seattle enters the 10 a.m. PT game at the Georgia Dome ranked No. 1 in rushing offense while Atlanta will enter rated 21st in average rushing yards allowed, 123.2.

“Seattle has done a very nice job of running the football,” said Smith,  in his fifth year of coaching the Falcons. “Marshawn Lynch has had a very good year this year (1,590 regular-season yards, 132 vs. Washington last Sunday) and I’ve been impressed with Robert Turbin as well, and then you throw in the running ability of the quarterback and you can see why they have had as many rush attempts as they’ve had.

“I think everybody wants to control the tempo and start fast. I think that’s probably the thought of every coach 99 percent of the time. We want to control our tempo. I think those our great markers being successful.”

Atlanta reeled off an NFC-high 13 wins this season. They started 8-0, didn’t lose until Week 10, lost in Week 14 and then dropped their season finale at Tampa Bay 22-17. Over the 17-week season, Seattle and Atlanta played five common opponents in six games for each: Carolina, Dallas, Arizona, Detroit and Washington.

While the Falcons finished 21st in rushing defense, they also finished fifth in points allowed, 299 (the Seahawks allowed 245).

“This Seattle defense has been very impressive in terms of scoring defense,” said Smith. “They’re No. 1 in the league, they’re top 5 in total yards. It’s very impressive up front. They have some very physical guys. It starts with the two inside guys, Alan Branch and Brandon Mebane. Red Bryant is a big, physical player.

“I’ve been impressed with the speed of their linebackers. They can run. At cornerback, it’s arguably the best duo at the position in the NFL this year (Richard Sherman and Brandon Browner). They’re big, long, physical players. Then there is their safeties. They have a big one in Kam Chancellor, and then Earl Thomas has great speed and makes a lot of plays.

“They’re as big and as physical as there are in the league,” said Atlanta quarterback Matt Ryan, who threw 32 touchdowns this season and posted a 99.9 passer rating. “Richard Sherman played very little the last time we were out there, but played a little bit out there in nickel situations. He’s a big, physical guy. (Brandon) Browner, on the other end, obviously a big, physical guy as well. They’re good.”

Smith said that he believes the key to stopping Seattle’s running game will be making certain his defenders “take good angles to the ball” and don’t allow “explosive plays” – hard to do when quarterback Russell Wilson presents such a threat with the read option.

“I have seen a lot of tape on Wilson, 17 games this season, and he does a very good job with ball security,” said Smith. “I think he has a great understanding of what they’re asking him to do in the passing game, he has great escape ability, and he’s taking care of the football.That’s why I think Seattle is so good in terms of their turnover ratio.”

If the No. 5 Seahawks, 2½-point underdogs to the No. 1-seeded Falcons, win Sunday, they will face the winner of Green Bay-San Francisco in the NFC Championship game.