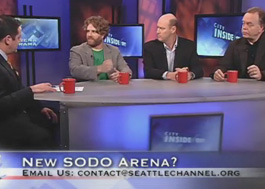 While the NBA’s All-Star Game Weekend in Houston ended with no definitive word about whether the Kings franchise will stay in Sacramento or move to KeyArena, matters in Seattle begin to heat up Friday with the start of the first of two lawsuits against the SoDo arena project proposed by Chris Hansen.

A lawsuit brought by the longshore union against the site will have its first hearing Friday in King County Superior Court. The suit contends the city and county reached agreement on the site before completion of an environmental impact study that would consider impacts on freight mobility as well as alternate locations for the arena.