In previous Olympic cycles, it has cost potential U.S. bid cities millions of dollars to be considered as the American applicant city.” That process is changing. 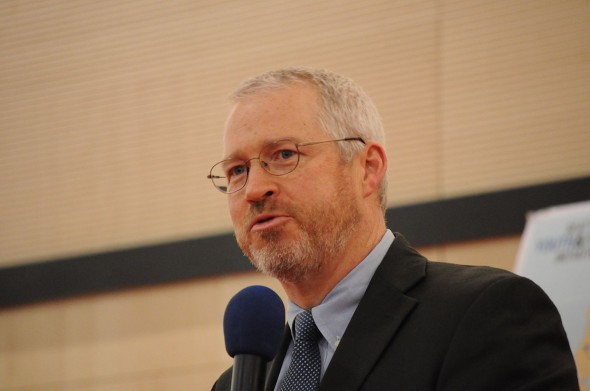 Seattle Mayor Mike McGinn has authorized the Seattle Sports Commission to learn more about what is involved in becoming a U.S. bid city for the 2024 Summer Olympic Games. / Wiki Commons

The Seattle Sports Commission confirmed Wednesday that it will enter into “informal” discussions with the U.S. Olympic Committee about the possibility of the city entering the process of becoming a bid city for the 2024 Summer Olympic Games, Sportspress Northwest has learned.

“It’s not a bid, it’s just an opportunity for us to consider whether we want to be considered,” said Ralph Morton, executive director of the SSC. “We’ll hear more. It’s discovery time for us. It’s an opportunity to learn more and find out what that means. There are no commitments involved.”

Last month, the USOC sent out generic inquiries to 35 major cities that had either previously expressed an interest in bidding for the Summer Olympic Games, or were among the 25 largest U.S. metropolitan markets.

Seattle Mayor Mike McGinn’s office reviewed the USOC material and elected earlier this week to pursue the process of learning more about what becoming a U.S. bid city would entail.

The mayor’s office bypassed an unofficial Seattle bid committee that had been seeking to enter into talks with the USOC and instead charged the Seattle Sports Commission with that task. The SSC followed up by contacting the USOC on the mayor’s behalf.

“Right now, we are waiting to hear back from them,” Morton said of the USOC. “We’re interested in hearing more and finding out about the journey.”

Seattle’s interest in a potential Olympic bid, Morton stressed, does not mean it will actively pursue the chance to become one of the five U.S. bid cities for the 2024 Games, only that Seattle is agreeable to discussing what such a pursuit would require.

In the past, it has cost millions, as Scott A. Blacknum, the USOC’s CEO, explained in his February letter to McGinn. But the USOC is hoping to streamline the process and cut down on initial costs.

“The U.S. submitted bids to host the 2012 (New York) and 2016 (Chicago) Olympic Games,” Blacknum wrote to McGinn. “Both New York and Chicago had to participate in a domestic bid process that cost upwards of $10 million before they were designated by the USOC as an IOC Applicant City.

“We are going to select our Applicant City through a thoughtful but more efficient process. The first step in that process is to have discussions with interested cities.”

In addition to spending at least $10 million to become U.S. applicant cities, New York and Chicago had to come up with operational budgets of at least $3 billion in addition to the cost of venue construction and other infrastructure.

London ended up spending more than $15 billion on the 2012 Summer Games.

The USOC board hopes to narrow its list of potential 2024 candidates to two or three by early next year. A decision on the U.S. designated city would be made later in 2014, which would give the American hopeful two years to organize a bid to International Olympic Committee members. The IOC will pick a 2024 host city in 2017.

The USOC said it hopes to streamline the domestic process  — which Seattle is about to enter — by replacing costly formal presentations with informal discussions, at least during the early stages. That could greatly reduce the millions of dollars that cities have spent during recent cycles.

Depending on what the SSC learns in those “discussions,” the city can opt to move forward to become a formal U.S. bid city applicant, or withdraw from the process.

Los Angeles, which hosted the 1932 and 1984 Summer Olympic Games, has already responded positively to the same letter McGinn received. San Francisco and Dallas are also expected to respond that they are interested, as is Tulsa.

Several major cities, including Chicago and Detroit, have declined to even engage in informal talks about becoming U.S. bid cities for 2024. Chicago, still stinging from the rebuke, was eliminated early in the final IOC 2016 voting despite receiving a strong endorsement from President Obama, a Chicago resident.

Detroit Mayor Dave Bing, the former NBA star who could have been speaking on behalf of many U.S. cities, said recently that his city’s dismal economy precludes a pursuit of the 2024 U.S. bid. Boston has also declined, according to published reports.

Blacknum’s letter to McGinn spelled out several requirements cities must meet to host the Olympic Games, including 45,000 hotel rooms; an Olympic Village that sleeps 16,500 and has a 5,000-person dining hall; operations space for more than 15,000 media and broadcasters; an international airport that can handle thousands of international travelers per day; public transportation service to venues; roadway closures to allow exclusive use for Games-related transportation; a workforce of up to 200,000.

This marks the second time that Seattle has expressed interest in becoming a U.S. bid city for the Summer Olympic Games. Between 2001-06, a Seattle bid committee raised nearly $500,000 privately in an attempt to become the U.S. applicant city for the 2012 Games, which eventually went to London.

But the Seattle City Council, by an 8-1 vote, refused to allow the  committee to proceed, and the effort died there.