Seahawks draftee may bring continent with him 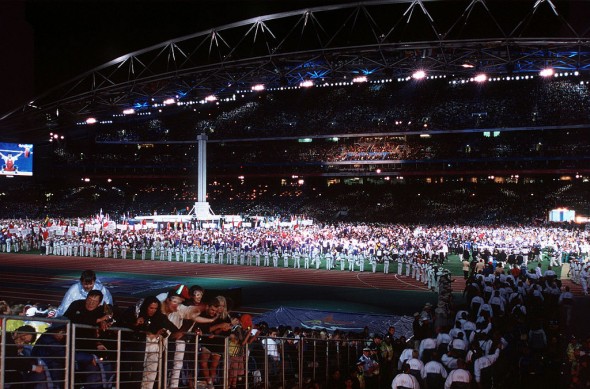 Seahawks draftee Jesse Williams is from Australia, where the world found out with the 2000 Olympics just how nuts Aussies are for sports. / Wiki Commons

MELBOURNE, Australia — The selection of Jesse Williams by the Seahawks in the fifth round of the NFL draft Saturday made plenty of headlines here in Australia. Perhaps intrigued by a few exuberant (and clueless) local media types who had the defensive tackle from Alabama going in the first round, his three-day wait became a reasonably big story.

Of course, this interest makes sense when you consider that Williams is just the
second Australian to be drafted.  Defensive tackle Colin Scotts, a former rugby star who was recruited to Hawaii, played seven games for the St. Louis Cardinals after being
chosen in the third round in 1987.

Other than Williams and Scott, Australians have mainly contributed to the American
version of football by punting. Darren Bennett, who played with the Chargers and
Vikings, was named to the NFL’s 1990s All-Decade team, while Ben Graham (Jets,
Saints, Cardinals, Lions) is still the only Australian to have played in a Super Bowl.
Mat McBriar has been the Cowboys punter for the past nine seasons, while Sav Rocca is a six-year veteran currently with the Redskins.

But as far as getting down and dirty in the mud, er FieldTurf, Williams could be a
pioneer. Scotts played briefly and in an era where NFL games were seen only on
weekly highlights shows. Now we have live games – often doubleheaders – on both
Fox Sports and local channel One HD every week, with live Sunday Night Football
and Monday Night Football on ESPN. That’s four to six live games every week. With seven to 10 weekly college games airing as well, American football is becoming ingrained in the
Australian sporting culture.

The good news for the Seahawks is not only have they selected a “potential stud,”
if Williams makes the final roster, the team with the best fans in the NFL will pick
up a few thousand more. I’m not prepared to label them the 13th man, but trust me,
there will plenty of new fans from Australia.

Australians are crazy about sports – or sport as they say here – as the 2000 Summer Olympics established. Any Aussie making it on the big stage becomes a household name. Not only do Australian fans buy and wear NBA jerseys with “Bogut” (Golden State’s center Andrew) on the back, they adopt the teams as their own and even make road trips to watch their heroes.

You don’t have to walk very far to meet an Aussie who’s been to Staples Center or Yankee
Stadium.

The San Antonio Spurs are a fan favorite over here, not because of Tim Duncan
and Tony Parker, but because of the club’s long connection to Australia. Former
Seton Hall star Andrew Gaze won a ring in 1999 (albeit wearing a suit and sitting
behind the bench), while ex-Australian Olympic coach Brett Brown is an assistant to
Gregg Popovich and Aussies Patrick Mills and Aron Baynes, the former Washington State standout, are on the team’s roster.

So it’s not a big leap to imagine that the neon green-and-blue Seahawks jersey could
become more commonplace on the streets of Melbourne, Sydney or Brisbane. If
Williams does make it, the concession stands at CenturyLink might have to start serving Vegemite.