An NFL suspension for one Seahawk, a DUI bust for another. It’s only the off-season, but it’s never too soon for a serial dope-slap for a title-caliber team. 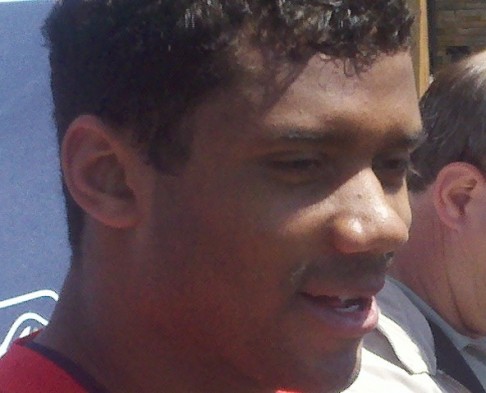 Russell Wilson put responsibility on his teammates to do the right thing. / Art Thiel, Sportspress Northwest

Once beloved by the pro football nation as Super Bowl favorites, the Seahawks are causing eyebrows to arch, maybe furrow. The local franchise already has been nicknamed by the twitterati the SeAdderall  Seahawks. Affections in the big time are fickle.

“I’m really disappointed that we have to deal with anything like this, but there are going to be other issues too, and we’ll have to deal with them,” said coach Pete Carroll, and he wasn’t kidding. After word that the count reached six among Seahawks violating the NFL’s substance-abuse policy since 2011, more bad news — backup QB Josh Portis was busted May 5 for a DUI on I-90 exiting the Mount Baker Tunnel, and will be arraigned next week.

News of the DUI bust in the Seattle Times came nearly upon the start Monday of the Seahawks’ initial organized team activity of the offseason, the first time that Seahawks veterans, rookies and free agents were allowed by the NFL calendar to gather, padless, to work out together.

A battalion of media gathered at the Renton practice facility less to see heralded newcomer Percy Harvin bust a move, and more to hear how Carroll would move past the busts. A dubious start to a season highly anticipated by the Seahawks masses.

“Unfortunately, if you go wrong, you get popped, and that’s how this thing works,” Carroll said. “Over the years, I’ve seen what it takes to be consistently on top and to stay on top and to keep winning, and to endure all that goes along with that it takes a giant commitment. Guys have to really be in it for the right reasons and to do things right.”

Asked if, as the head guy, he takes some responsibility, he said, “Always, always . . . Sometimes the message in some areas are taken to heart and delivered upon . . . and sometimes it doesn’t hit home. That doesn’t mean we kick them out the door. That means we try to help them through it and make them see the right thing.”

Neither the NFL nor the Seahawks have identified the drug in question in the Irvin episode. But since Irvin in his apology mentioned that he failed to provide the NFL with a prescription, the drug is suspected to be Adderall, a stimulant on the banned list as a performance enhancer and very trendy in the NFL.

Last season, cornerbacks Brandon Browner and Richard Sherman were suspended for Adderall, although Sherman had his suspension overturned when his complaint about a chain-of-custody problem was upheld on appeal. Sherman made a remark in an April interview in Vancouver B.C. that “half the league” was using Adderall.

The league-leading frequency of the violations maybe make the Seahawks subject to a fine from the NFL office. According to a story on NFL.com Monday afternoon, the league has a policy about cumulative violations of PEDs and personal conduct policies in a given season that can be subject to punishment.

“There are financial consequences for a team that has multiple players suspended in a season under those policies,” league spokesman Greg Aiello said. No specifics were provided, and the Seahawks violations have come over parts of three seasons.

Apart from the administrative issues, the Seahawks are losing players for non-injury reasons, and it’s starting to annoy teammates, maybe even Russell Wilson, although when asked Monday, the Seahawks quarterback kept his emotions in check.

“Obviously we want everybody here,” Wilson said. “It’s an important thing to have everybody to be able to play at the highest level. “We’ve got to make the right decision as players.

“It doesn’t matter what the coaches say  . . . we have to make the decision as players, and I think we’ll do that. We have to continue to be leaders in the locker room and make sure that everybody knows (use of performance enhancers) is unacceptable. We’ll still support the guys, whoever is in trouble or whatever, but the next guy’s got to step up.”

Speaking of stepping up, from the pragmatic standpoint of the regular season, their top two pass-rushing defensive ends, Irvin and Chris Clemons (knee surgery) will be unavailable. Then came news after the OTA that newcomer DE Cliff Avril is having trouble with a plantar fascia in a foot, hasn’t run in awhile and may need a couple of more weeks of rest.

There’s no indication yet it’s a threat to the season, but the injury has the capacity to linger. Nevertheless, the Seahawks are now thin in a position they targeted to strengthen in the offseason.

Nor did it help that RB Marshawn Lynch, the team’s key to a run-dominated offense, chose not to show. The OTAs are not mandatory, and Lynch is not injured.

Given the anticipation for the Seahawks’ season, every bit of unfavorable news stands out like a spaghetti-sauce stain on a Marine in dress uniform. And it’s especially true when the slop is self-inflicted.

If this Adderall-abuse business is true, we all know it is not unique to one team, nor one industry. We also know that most competitors in any endeavor are looking for undetectable edges.

But the Seahawks nevertheless are an unusual team, because they appear to be championship-caliber. If these readily avoidable violations are an indicator of the response to that pressure, this team is more vulnerable than it appears, and at the very least in need of a Three Stooges-style serial dope-slap.

Wilson should feel free to grab a stool and start going down the row.