At the smallest school in the most remote location in the Pac-12, WSU AD Bill Moos thinks it’s possible to string together some 10-win seasons as was done 10 years ago. 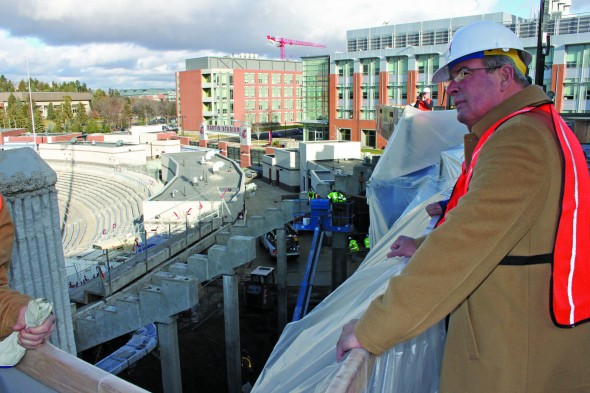 PULLMAN — Washington State athletic director Bill Moos sometimes speaks carefully when asked about the future of the NCAA — and consequently — his alma mater.

The college football landscape, convulsed by multi-billion-dollar television contracts, conference realignments and outrageous coaching salaries, has increased pressure on the former WSU offensive lineman to take a perceived small-time school in a big-money conference — University of Washington AD Scott Woodward referred to them as an “irritant” in 2009 — and make it more competitive.

However, there was no hesitation last week as Moos leaned back in his leather chair and talked of how he plans to engineer the turnaround.

“We’ll take USC’s rejects and beat (the Trojans),” he said in his office inside the Bohler Athletic Complex.

In 2011, Moos replaced Paul Wulff with Mike Leach, a move the AD believed would re-energize an apathetic fan base and give WSU football a level of national credibility it lost when Mike Price left in 2002 for Alabama.

However, Leach’s inaugural 3-9 campaign was marred by player discontent; a response to his tough disciplinary policy and grueling midseason workouts. In early May, Moos said fans will see the most significant improvement in year three of Leach’s five-year contract. The Cougars open the 2013 season with road games against Auburn and USC and still have an offensive line lacking size and depth, but Moos sounded at ease a year into the hire that could define his administrative career.

“I’ve got a national coach of the year running the program and a quality staff,” he said.

During the slow rebuilding process, he finds comfort in knowing the 12-year, $3 billion television deal between the Pac-12, ESPN and Fox Sports comes amid the most chaotic time in NCAA history.

“Right now (the Pac-12 has) the most lucrative television contract in college sports,” Moos said. “All of the others are to be negotiated during the time that ours is in effect.”

His answer to the financial future of WSU athletics extends beyond keeping pace in college football’s ruthless arms race that mandates building grand facilities in an effort to land the best recruits.

In his first year at WSU, he helped lead successfully the campaign for equal revenue sharing from the yet-to-be-born Pac-12 Network, spawned by the new deal with Fox and ESPN. The bigger schools initially lobbied for a bigger cut of revenues.

This fall the Cougars will receive their shot at playing in front of an audience they once yearned for when Arizona State visits Pullman on Halloween, a nationally televised Thursday night game, for which WSU President Elson S. Floyd cancelled afternoon classes.

Prior to the Pac-12 revenue sharing agreement, WSU was often on the short end of gate share and revenues from televised games not on a national network.

Those days are over.

In the last year of the old Pac-10 TV deal in 2011-12, WSU brought in about $13 million from TV rights fees. In the first year of the Pac-12 Network, revenues should jump past $21 million for each of the original Pac-10 members, according to Jon Wilner of the San Jose Mercury-News. The Pac-12 won’t release the TV  revenues until next spring. In 2012-13, the WSU athletic department generated $42 million in revenue, nearly $17 million of which came from the television licensing rights.

Meanwhile, the arms race has already claimed a regional victim, a member of which operates eight miles east of Pullman — the Western Athletic Conference quit football.

Last fall, Idaho and the six other remaining football programs played their final WAC schedules before moving on to the Mountain West Conference and Conference USA. New Mexico State and Idaho will be independent next season, then move to the Sun Belt Conference in 2014.

Moos dismissed the idea WSU will ever suffer a similar fate but admitted an increasingly evident fact: the school’s football program wouldn’t benefit from any more conference expansion, including the four, 16-team super-conferences idea that some college sports administrators and TV executives have speculated is the final outcome of realignment.

“When we were entertaining the prospects of Texas and Oklahoma (joining the Pac-12) it wasn’t in Washington State’s best interest. We could have got lost in that,” he said.

Moos continues his role as part-fundraiser and part-politician, asking alumni for major donations — he calls them “gets” — as a means to close a revenue gap he helped create.

“You have to prospect, identify, cultivate and the right person has to make the ask,” he said. “I think we’re in pretty good shape there.”

When he was AD at Oregon, he reconnected Nike founder Phil Knight to his alma mater.

“I’m not reluctant,” he said about his attitude toward college football’s arms race. “I’m a believer in that, and everywhere I’ve been, that has been a priority — even at Montana. ”

Last summer Moos predicted WSU’s club, loge and suite seating on the south grandstands would bring in an extra $3 million during the 2012 season.

The annual Seattle game, WSU’s conference matchup at CenturyLink Field, nets the school up to $2 million in ticket sales.

“The revenue is a big piece of it, as is our exposure in the west side of the state,” Moos said of The Seattle Game. “We’ve got thousands and thousands of fans and corporate partners.”

The obstacles are significant, considering in 2012 the WSU athletic department surpassed only Utah for lowest revenue stream among public universities in the conference. Conference leader Oregon grossed $85 million.

“The equal television revenue is just huge,” Moos said. “It gives us a chance to play on a level playing field.”

From First To Last To…

In hindsight, the achievement seems almost inconceivable: The Washington State football team, led by coach Bill Doba, won its 10th game — the 30th in three years —  by beating Vince Young and the No. 5 University of Texas in the 2003 Holiday Bowl.

The administrative misstep that came next would make former Ohio State president Gordon Gee look wise. It’s part of the reason the program hasn’t reached a bowl game in a decade, according Moos. 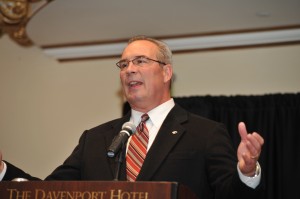 Bill Moos has a revised pitch to give Cougars football recruits and their families. / WSU Athletics

Nor was it common for a program that for most of its history drifted between mediocrity and misery. The Cougars were poised to capitalize on their success in the conference’s most remote, inconvenient location while operating under what was the smallest budget in the then-Pac-10. By failing to reinvest immediately in facilities to take advantage of unprecedented fan interest, Moos suggested the previous regime committed a gaffe so egregious that its effects are still felt. The football team’s 10 wins from 2008-2012 indicate he’s right.

Moos put it on those above his predecessor, Jim Sterk: “I’m not sure there was a administrative priority to invest.”

“We don’t need to compete with an arms race in coaching salaries,” Anne McCoy, WSU’s deputy director of athletics, was quoted as saying in an Associated Press story in 2009.

Moos has made it his priority. An 84,000-square-foot football operations building complete with a weight room, new locker rooms, training rooms and offices for coach Mike Leach and his staff will be complete by the 2014 home opener. Wrapping around Martin Stadium’s west end zone, the construction bonds for the project are more than $61 million.

Sterk expanded Martin Stadium — adding a larger concourse under the north grandstands and more restrooms — though the fundraising for the premium seating never came to fruition during his tenure. Moos hinted the delay in facility improvements impacted recruiting during Doba’s final years in Pullman, and fans blamed assistant coaches for failing to bring in top-end talent.

“If you stay there and rest on your laurels you’re going to go from first to worst overnight,” Moos said.

Well, almost. WSU football didn’t fall to the Pac-10 cellar until 2009. However, they did lose touch with what the modern student-athlete looks for in a school, Moos said.

“We don’t have kids interested in Washington State because of Drew Bledsoe or Rueben Mayes,” Moos said. “They want to come here because we’re in the Pac-12, are facilities are what they’re going to be — great — and they have a chance to play for Mike Leach.”

McCoy, meanwhile, still works for the WSU athletic department and has adjusted to the aggressive approach to funding sports. She said Thursday via email her preference is to pay coaches based on fair market value (resume and credentials) rather than basing salaries on what other schools in the conference pay their coaches.

“Any time there is a change in leadership, that person has their philosophy on how they run their department,” she said. “The landscape has certainly changed in the conference.”

Moos knows what it takes to overhaul an athletic department and he understands the type of recruit who gravitates towards WSU. He was one of them.

“When I was senior in 1972 and USC won the national championship we had a pretty good team, too,” he said. “They had a left tackle who was third on the depth chart and was a first round draft pick in the NFL. That kid today would be at Washington State or Oregon State or Utah.”

After five years as an athletic director at Montana, Moos engineered Oregon football’s growth from an afterthought to a national powerhouse. He said the rebuilding process begins and ends with football.

“At Oregon we won 13 Pac-10 championships. Only two were in football.”

WSU’s last championship came in 2002 when a Jason Gesser-led team shared the Pac-10 title with USC en route to a second Rose Bowl appearance in five years. Moos said it’s still possible for the Cougars to recapture similar success despite operating under tighter financial constraints. They ranked 59th in the country in gross revenue in 2012 and the athletic department lost roughly $5 million.

Moos responded to the disparity by hiring Leach in 2011, a move that almost immediately attracted 3,000 new season ticket holders to 33,000-seat Martin Stadium.

His other answer to competing with the schools operating in major media markets has been three-fold.

He rebranded uniforms for every sport, increased marketing efforts and tried to instill a department-wide philosophy that spurns the “Coug-it” mentality he feels players and alumni have accepted over the years since he was a first-team All-Pac-8 offensive tackle for Jim Sweeney.

Moos helps recruit, too — selling Pullman’s safe location and family atmosphere to football and basketball recruits and their parents when they make their first trip to the Palouse.

The tactics won’t bring WSU any closer financially to the bigger programs but it could help in the wins column — eventually.

“People seem to want to shy away from: ‘Yeah, we’re out in the middle of nowhere and there’s no malls,'” he said. “Guess what? That’s appealing nowadays. Especially to parents.”

Moos thinks he has the sales pitch, the coach, the facilities and the TV exposure that will give Cougars football the chance to replicate the three-year run it had from 2001-2003. In the NCAA arms race that is piling up casualties, the epic feat would be a capstone to a high-impact career in West Coast football.

Especially if WSU is no longer an irritant to Washington, and instead a threat.