Another feeble day at the plate wasted another good Felix Hernandez start, as the Mariners fall to a season-low 10 below .500 after losing 3 of 4 to the Yankees. 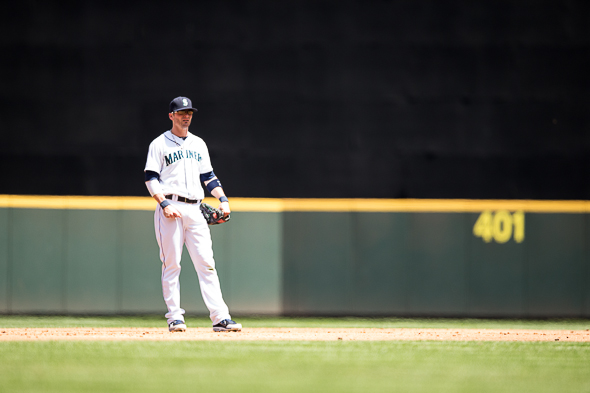 So devastated by injuries are the Mariners (27-37) as they hobble and wince through June that not even a pitching mismatch — Felix Hernandez vs. David Phelps — could help a team that started six position players who ended the afternoon hitting .225 or worse. Sunday’s 2-1 loss to the Yankees (37-26) in front of a season-high 43,389 Safeco Field fans was as much expected as it was harmful to turning around a season.

Hernandez was still himself, methodically carving through the Yankees lineup to the tune of seven strikeouts in as many innings, yielding five hits and one earned run. The offense was still feeble — six hits — and will remain so for the near future. Manager Eric Wedge’s face was a light shade of purple as he tried to explain away another series loss.

“We can’t keep watching this,” he said, shaking his head. “We have to be better offensively. When we do create opportunities we have to take advantage of it. Having said that, we have to create more opportunities. We’re not going to come through every time. But we damn sure have to do better than we’re doing now. ”

Put outfielder Michael Saunders among those with whom Wedge is dismayed. The 26-year-old continued his midseason swoon with another 0-for-4, including the game’s final at-bat when he popped out meekly to left field against Yankees closer Mariano Rivera with the tying run on second base. His average is .203.

The Mariners squandered another scoring chance in the eighth when, with the game tied at one and one out, Jason Bay struck out on four stroke-inducing breaking balls courtesy of Yankees setup man David Robertson with a runner on third base.

“I tip my cap,” Bay said afterwards. “There really wasn’t a lot I could do.”

There wasn’t a lot the rest of lineup could do either. Michael Morse and Justin Smoak were resting injuries, Kendrys Morales played through one and catcher Kelly Shoppach is battling fatigue.

“We’re beat up and we’re tired,” Wedge said. “I appreciate all that, but we have to stick our nose in there and do a better job of fighting through ABs.”

They also need to find out how to win low-scoring gameswith timely hitting. The Mariners were 1-for-6 with runners in scoring position. They are a season-worst 10 games under .500.

Seattle’s only option is to cling desperately to the notion of playing .500 ball until players return from the DL, or Dustin Ackley continues to solve his problems in Tacoma, forcing management to recall him. Either way, it doesn’t deflect responsibility from a front office that bet preseason on a player (Gutierrez) who never stayed healthy, and another who has never produced consistently at the major league level (Saunders).

Hey, there’s always hope, if you pay no mind to the beat-up roster aging precipitously before the grueling late summer.

“This maybe wasn’t what everyone envisioned when we broke camp,” Bay said. “But I don’t know any team that is. Maybe it’s more so us than anybody else, but once again nobody feels sorry. That’s a good team over there.”

The Mariners, meanwhile, won’t be one until they find a a way to provide Hernandez with run support. The former Cy Young winner is 98-25 with a 2.90 ERA in 161 career starts when Seattle gives him two or more scores. His only hiccup Sunday came when he surrendered an RBI-single to Yankee center fielder Brett Gardner in the second inning.

Gardner finished with three hits off Hernandez but was the final out of the seventh inning, swinging and missing at a mid-90s fastball that dotted the outside corner.

“I was just trying to get him out,” Hernandez said. “That was big for us.”

But not enough to keep Seattle reliever Yoervis Medina, in the top of the ninth, from yielding the go-ahead, two-out single to Chris Stewart, the Yankees No. 9 hitter, after Ichiro opened with a walk.  The 31-year-0ld journeyman catcher finished the afternoon with his average at .276.

Sounds like he would make a good cleanup hitter for the Mariners.