The Mariners, a 3-2 winner over Oakland Friday on Mike Zunino’s first major league home run, will send Felix Hernandez to the mound Saturday to face the A’s. 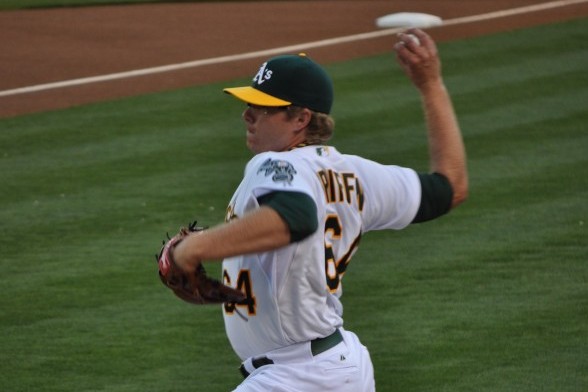 The Mariners made a major move Friday by signing 41-year-old catcher Henry Blanco, a well-traveled catcher with 16 years of major league experience, while simultaneously designating for assignment their recent starter, Kelly Shoppach. The move says that the Mariners are handing the backstop slot for the foreseeable future to 2012 first-round draft choice Mike Zunino.

For one game, anyway, the decision by GM Jack Zduriencik and manager Eric Wedge to promote Zunino paid off handsomely. Seattle’s fifth starting catcher this season, Zunino cracked his first major league home run Friday and made a stellar defensive play to cut down a runner at the plate as the Mariners defeated the Oakland A’s 3-2.

Zunino’s homer, a massive shot to center in the seventh inning, became the game winner for the Mariners, who lost five of eight before upending the Athletics. It also made a winner out of lefty Joe Saunders, who finally won a road game after starting the season 0-4, 9.00 away from Safeco Field.

The Mariners have an opportunity to do something special. With Felix Hernandez pitching Saturday and Hisashi Iwakuma Sunday, Seattle can sweep Oakland for the first time since April 10-12, 2009.

Hernandez defeated Oakland once this season and sports an impressive record at O.com Coliseum. His opponent Saturday, A.J. Griffin, hasn’t won in his past three starts. A closer look:

The 27-year-old Hernandez, in his ninth major league season, all with Seattle, will make his 15th start and second against the Athletics. Hernandez has won his last two decisions, took a no-decision in his last outing and hasn’t lost since May 25. He beat Oakland  on Opening Day, and has an outstanding record when pitching at O.com Coliseum, 7-2 with a 2.96 ERA in 14 starts.

The 25-year-old Griffin, in his second major league season, both with Oakland, will make his 14th start and second against the Mariners. Although Griffin has five victories, he’s coming off two losses and a no-decision. Griffin had his best outing May 3 when he defeated the Yankees 2-0, allowing six hits over 7.0 innings. The Athletics selected Griffin in the 13th round of the 2010 amateur draft.