Thiel: Good move by Mariners to put Ackley in LF

In the welter of injuries, misjudgments and disappointments that have followed the Mariners in 2013, making Dustin Ackley an outfielder is finally something that makes sense. 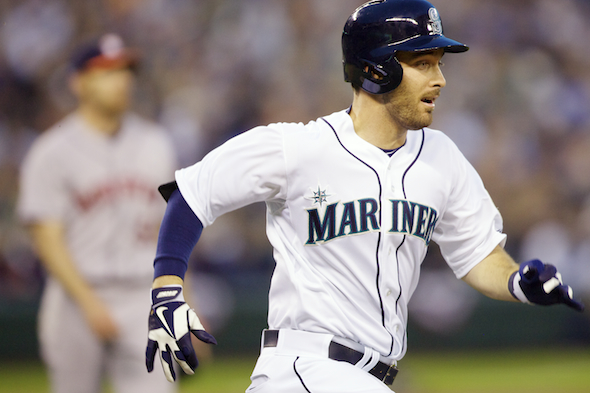 So many roster issues are upside down for the Mariners this season — led in homers by a 41-year-old, nearly led in batting average by a 35-year-old, and mass failures by the young core — the assumption is that everything management does is a mistake. A fair, reasonable assumption by anyone. But for the sake of novelty as much as baseball logic, let’s offer one contrary thought:

The move of Dustin Ackley from second base to the outfield while in AAA Tacoma is smart, because the prospect of redeeming a quality bat and finding a lineup answer while averting another sunk cost is easily worth the risk.

Ackley, you may have heard, is tearing up the Pacific Coast League since his demotion, hitting .406 in 15 games. The Mariners also told him to take his glove to the outfield, where he played at the University of North Carolina.

Meanwhile, his replacement at second, rookie Nick Franklin, has shown at the plate and the field in his short time in the majors that the switch has a chance to be permanent.

Beyond Ackley’s numbers is a self-awareness that is developing after the first serious setback in a career that until then had a perpetual upward arc.

“I was just thinking too much up there,” Ackley told the Tacoma News Tribune this week about his time in Seattle. “About not getting out, not doing this and not doing that, when I should have taken the thoughts out of it.

“Just relaxing and taking my mind off the failures I had in the big leagues has been the biggest thing. There’s no pressure to do anything like there is at the big league level, and that’s really the mentality I have to take here and then continue to take up there.”

Certainly a 14-game sample at AAA is hardly sufficient evidence to suggest mission accomplished. And skeptics will read into his remarks that Ackley may be too soft to cut it in the majors, suggesting that if he felt pressure in Seattle with 13,000 in the stands, imagine what it would be like at Yankee Stadium.

But the pressure is only marginally from ticket buyers. Pressure comes from two people, manager Eric Wedge and GM Jack Zduriencik, both in their contract years trying to hold their jobs in the face of criticism that they are failing to develop quality talent, Exhibit A being Ackley, taken with the No. 2 pick in the 2009 draft.

While the consensus by many scouts in the 2009 draft was that Ackley was a legit No. 2 pick, there is now, in hindsight, criticism that the Mariners didn’t do the right thing in June 2011 when they brought him up to the majors, even though he was killing it in the minors. After his first half-season Seattle, Ackley’s bat has been in steady decline, finally hitting .203 before the demotion.

He had become a defensive hitter, taking strikes and attempting to avoid outs instead of taking command of the at-bat. A part of that had to be some result of team surrounding him being in a perpetual stage of roster tumult that produced so little, causing him and others to try things other than what they do best.

The decade-long franchise paralysis is an external factor over which Ackley, Mariners fans and the baseball universe has no control. In such a situation, Ackley and every player needs to simplify matters to see-ball, hit-ball, catch-ball, throw-ball and let individual ability and work ethic be the coin of their realm. There is no team sensibility here because there are no leaders, customs, traditions or sustainable success to create order and sense of mission. The organization is as much like, say, the St. Louis Cardinals, as Danny DeVito is like George Clooney.

If the owner and board of directors don’t act as if they care, the players have to use the situation, rather than let the situation use them. Which is why Ackley should embrace the shot he’s getting in the outfield.

He not excited yet. That’s OK, too.

“That would be tough,” Ackley told the Tribune of a possible position change. “That wouldn’t be ideal. It would be a tough transition. But if I had to, if that’s what it takes. I’ve changed positions to second, I guess changing to somewhere else wouldn’t be something I couldn’t do.”

Being pissed off is a good thing right now for Ackley. The demotion and the position switch run the risk of undercutting him. But the better chance is that a premium athlete will respond the right way.

The long-term outcome is hard to discern, because there is no long term when it comes to the Mariners. Wedge and Zduriencik have to win now to save their jobs, so they brought in Raul Ibanez, Jason Bay, Mike Morse, Aaron Harang, Jeremy Bonderman and Kendrys Morales on one-year contracts in the hopes that youngsters would produce their successors by 2014 and beyond. Instead, Ackley, Jesus Montero, Michael Saunders, Justin Smoak, Erasmo Ramirez, Brandon Maurer and Franklin Gutierrez have been, for various reasons, unproductive.

Turns out that beyond Franklin and one game’s evidence from catcher Mike Zunino, little help is likely from AAA or AA. One short-term development that is modestly plausible is the revived bat of Ackley returning to left field while Franklin, with three-plus years of minor-league seasoning behind him,  produces around a major-league average level at second base.

With so many holes in the roster, playing two positions can only serve Ackley and the Mariners well. None of it may matter long-term because by the July 31 trade deadline, when the Mariners are 15 games behind the low-rent Oakland-freakin’-A’s, the lineup and the manager may be unrecognizable.