Sounders On Roll, But So Is Real Salt Lake

The Sounders are on the road for three of their next four contests. The stretch starts Saturday when Seattle visits Real Salt Lake for the second time. 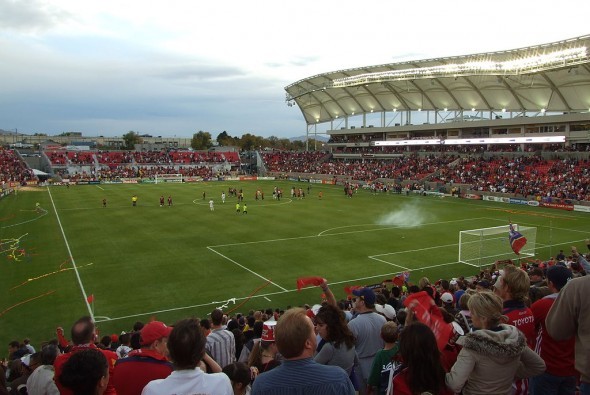 Despite the disruptions caused by national team callups (Brad Evans, Eddie Johnson, Mario Martinez, DeAndre Yedlin), the Sounders have managed to win five of their past six, earning 20 of a possible 27 points since April 13. During that span, the Sounders have also scored the second-most goals (17) in MLS with the second-best goal differential (+7). That burst has taken Seattle from last in MLS West to fourth.

A win by the Sounders Saturday would match the club mark for most wins (7) and points (23) in any 10-game stretch. The bad news is, the Sounders will be making their second visit of the season to Rio Tinto Stadium in Sandy, UT., to face Real Salt Lake and ace goalkeeper Nick Rimando. The good news is Johnson, Evans and Martinez are back. The hard news is that playing time must be found for all.

Real Salt Lake is undefeated in its past four, scoring 11 goals, and stands second in the race for the Supporters Shield, a point behind league-leading FC Dallas. RSL has lost only once (April 27 versus LA Galaxy) at home in eight games, going 5-1-2.

RSL is led by forward Alvaro Saborio, who co-leads the club with four goals, but only one since March 16. Olmes Garcia, tied with Saborio with four goals, most recently tallied two in a 3-1 win over the Galaxy. Javier Morales has one goal and three assists in the past two games and leads the team with five assists.

Rimando has been hellish on the Sounders. In the last six matches between Seattle and RSL, covering regular season and playoffs, Rimando has held Seattle to just two goals. Rimando is in his 15th season and ranks third all-time in games (334) and minutes (30,213). He’s second in wins (145) and shutouts (103), and third in saves (1,187).

Lamar Neagle has made consecutive starts with a goal and an assist. In his four starts, over RSL’s last five games, Neagle has four goals and added three assists, playing a part in seven of Seattle’s 13 goals.

“His running off the ball, his hold-up play (vs. Vancouver) I thought was pretty good — it was much, much better than it it’s been,” said head coach Sigi Schmid. “His connection of passes as a result of that is up over what it normally is. He’s just done really, really well.”

Schmid has listed Obafemi Martins as a probable starter at forward Saturday along with Neagle.  If Martins goes, it would be his fourth consecutive start.

“He’s played in so many different leagues in Europe that I think for him the easier part has been adapting to the type of play in our league,” said Schmid. “It’s different than if you have played all your life in one country and now all of a sudden you’re being exposed to a different style, a different method of training. He’s been exposed to all those things. He’s seen all that before. There are very few things that he can see in games or in training that he hasn’t experienced before. That made his adjustment a little bit easier.”

Schmid also suggested that Servando Carrasco, a lineup regular since May 4, will see plenty of time Saturday.

“He’s done what he’s been asked to do and he’s been very steady about it,” Schmid said. “A lot of people think that with experience, all of a sudden players do more. I don’t think players do more when they are experienced, they do what they do consistently. You can start to bank on it. I think his performances have been very consistent and that’s a reflection of the experience he’s gained in three years.”

Osvaldo Alonso (quadriceps) has missed considerable time recently and may not play again Saturday. He is not among the probables.

“We’re trying to make sure that we make the right decision going into this game and don’t rush him back and then lose him again,” Schmid said. “If he’s ready to play, we’ll play him because he’s an important member of our team. What it does is, if he’s not ready, it says in our mind ‘Let’s not push it, not be silly.’”

The Sounders will not have the services of Yedlin, off playing in the U-20 World Cup.

SERIES: Dates to March 28, 2009, when the Sounders won 2-0 at home on goals by Nate Jaqua and Fredy Montero. Sides met five times last year with Real Salt Lake winning 1-0 May 2, followed by three scoreless draws. In the last meet March 3o, Real Salt Lake pulled out a 2-1 victory. Brad Evans scored Seattle’s only goal. Over the past five seasons, the Sounders and Real Salt Lake have met 10 times in the regular season, four times in the MLS Cup playoffs and once in the U.S. Open Cup.

RSL NOTES: Coming off a 3-1 victory over LA Galaxy June 8 at Rio Tinto Stadium. RSL took the lead in the 44th minute when Khari Stephenson found the back of the net with a right-footed blast. Olmes Garcia headed home the game-winner in the 89th minute . . . Robbie Findley has two assists in his past two games . . .  Seattle striker Eddie Johnson and Real Salt Lake head coach Jason Kreis played together for four seasons (2001-2004) with the Dallas Burn.