A federal-court hearing Thursday in Oakland begins a long-awaited public challenge of the NCAA’s defense of amateurism in college sports. Much is at stake. 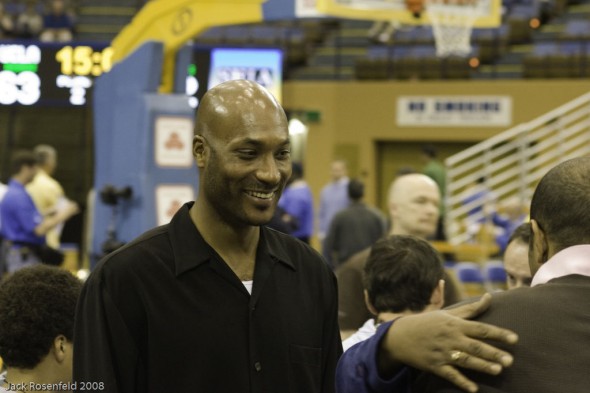 Ed O’Bannon was a great college player in the 1990s at UCLA, but may have greater sports impact on the game in court than on it. / Jack Rosenfeld, Wiki Commons

“There are always warnings, but look at the trends. Get objective and don’t get caught up in the hype,” Woodward said in March for an interview with Seattle Business magazine. “In five years, when we talk about Ed O’Bannon, it will be as a great UCLA player, not someone driving a lawsuit. Threats come and go.”

Time to start finding out. Thursday in a federal court in Oakland, O’Bannon, the former UCLA basketball player, along with Bill Russell, Oscar Robertson and a dozen other greats and ordinaries in big-time college sports, all plaintiffs, get a hearing in their lawsuit against the NCAA, Electronic Arts (EA) video-game company and Collegiate Licensing Co.

What the former players want, and deserve, is a piece of the action that their labors for generations have made for big-time college sports programs. If the judge in the hearing allows a class action over the use of college athletes’ names, images and likenesses, and a judgment or settlement is later reached, it could be, as Charlie Pierce wrote for Grantland at ESPN.com, the beginning of “an extinction-level event for college sports as we know it.”

Naturally, the NCAA is fighting it like a mother grizzly, knowing that a settlement potentially paying hundreds of millions of dollars to past athletes and future ones means college sports is going to take a haircut starting at the carotid artery. But three times the NCAA has tried to get the suit tossed out of court, and three times it has failed.

Woodward might be right. The NCAA might beat this case, as it has others historically. But the NCAA isn’t on much of winning streak right now. In fact, given the welter of controversy, misdeed and scandal pickling college sports — outlined in a comprehensive story on si.com this week — the NCAA might be down to an attorney and an argument similar to the one Joe Pesci’s character delivered early in the 1992 hit film “My Cousin Vinny”:

Ultimately, the NCAA is stuck having to defend the indefensible: Preserving amateurism amid capitalism that even China thinks is a good idea.

A primary technical argument the NCAA is offering is that players sign a document prior to receiving their scholarships that waives any claim they have on the revenues from use of their likenesses. If the players don’t like it, they can refuse, but they won’t be allowed to play for the university.

No 17-year-old is going to risk his chance for big-time ball to make a legal point. So the system self-perpetuates because there is no one to challenge the obvious restraint of trade.

But O’Bannon, several years ago seeing his image used in a video game long after his final college game in 1995 — a Final Four championship won in the late Kingdome — wondered why the revenue remained a single-receiver system. Do former players as a group have standing to advance the claim? That’s a part of what the Thursday hearing in Oakland will determine.

Meanwhile, back at the broken-down ranch, beleaguered NCAA president Mark Emmert, the former University of Washington president and Woodward’s boss in Montlake from 2004-2010 before taking the sports gig at $1.6 million a year, Saturday came up with a new reform wrinkle  — creation of a council of 10 athletics directors to advise him and his senior staff.

According to Emmert, the council’s purpose is to take sports decisions out of the hands of university presidents “to leave fewer decisions about things like recruiting rules in the hands of busy college presidents and more with the athletic directors who work with coaches and their assistants.

“It’s clear right now where the association has gone — it’s pushed the pendulum too far in one direction. And it really has cut athletic directors out of the national discussion.”

Problem is, university presidents, among whom he was once the highest paid, are supposed to be above the fray in order to render decisions based on the school’s greater good. The reason years ago the pendulum swung in the presidents’ direction is that sports seemed to be running the schools, rather than the other way. So is this move a restoration of order, or an amp-up of chaos?

With Emmert’s announced push of the pendulum the other way, it was unclear how the foxes planned to reform the henhouse.

Then again, if O’Bannon’s argument prevails in court, there may be no henhouse to reform.

Chickens flying in the barnyard.