After a 6-3 loss Friday, the Mariners seek a bounce-back led by RHP Aaron Harang, Mr. Inconsistency, Saturday against the A’s, 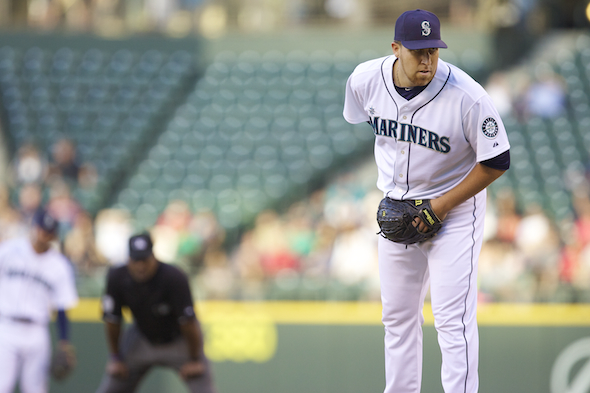 Aaron Harang, impossible to figure this season, will face the Oakland Athletics Saturday night at Safeco Field and try to get Seattle back on track after three consecutive losses. / Drew Sellers, Sportspress Northwest

No telling what Aaron Harang is going to do when he takes the mound these days, but based on the breadcrumbs he’s strewn since his May 27 start against San Diego, it could be anything from a complete-game shutout (two in last five outings) to a shelling. During the  stretch, Harang has won 9-0 while pitching like a vintage Pedro Martinez and lost 11-3, generating nasty echoes of Jeff Weaver and Carlos Silva.

Based on his last, the 11-3 shellacking in which he allowed 12 hits in 5.0 innings, Harang is due for a good one, although he’ll probably cross everyone up and throw a bad one.

Due to the irregularities of the rotation, Harang has not faced the Oakland Athletics this season. In fact, in his 12 major league seasons, Harang has faced the A’s once. He lost.

The Mariners can ill-afford another one as they further sink into irrelevancy. They dropped their third in a row Friday night to commence an eight-game home stand, and did so with Hisashi Iwakuma losing his second in a row  after giving up three home runs. The Mariners are 11.5 games behind the Athletics in the AL West.

Harang’s Saturday opponent, Dan Straily, lost his only start against the Mariners this season, giving up six runs on six hits in five frames.

The 35-year-old Harang, a San Diego native in his 12th major league season and first with Seattle, makes his 12th start and first against the Athletics. Harang, who started the season by losing his first three outings, has been all over the board in his last four. He followed a complete-game shutout May 22 with a no-decision and a 6-1 loss administered by New York. After throwing another complete game June 11, he was raked for four runs on 12 hits.

The 24-year Straily, a Redlands, CA., native in his second major league season, both with Oakland, will make his 12th start and second against the Mariners. After winning back-to-back starts May 21 and May 27, Straily has three no-decisions in his past four outings. He hasn’t won since June 12 when he beat the Yankees 5-2.