The Mariners have a chance to capture their first series in nearly two weeks Sunday when they close out a three-game set with the Oakland Athletics at Safeco Field. 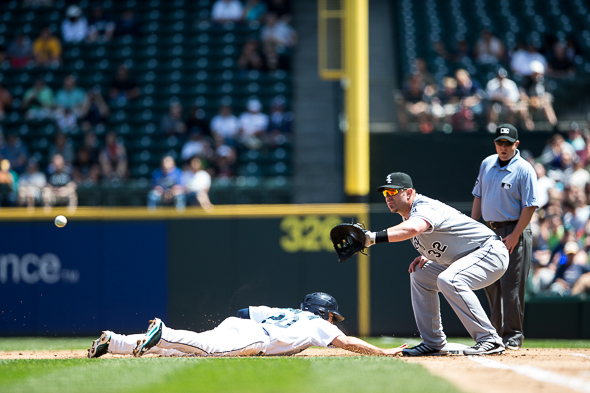 Jeremy Bonderman (32), covering first, will make his fifth start for the Mariners Sunday when they and the Athletics conclude a three-game series. / Drew Sellers, Sportspress Northwest

Ever since getting a bad first start out of the way (seven earned runs in 4.2 innings at Minnesota June 2 in his first start in more than two years), Jeremy Bonderman has been a surprisingly fine addition to an otherwise inconsistent back end of Seattle’s rotation. In three starts covering 14.0 innings against the Yankees, Astros and Angels, Bonderman has allowed just two earned runs.

Unfortunately for Bonderman, the usually feeble Seattle offense has tallied just eight runs in those starts with him on the mound. If not for that, and the failures of his bullpen, Bonderman might be 4-1 right now, giving the Mariners something positive upon which to dwell.

Overall, there isn’t much, but the Mariners did manage to rally from a 5-2 deficit Saturday night and defeat the Oakland Athletics 7-5. Raul Ibanez’s 15th homer tied the game 5-5 in the seventh and Nick Franklin’s two-run single in the eighth lifted the Marines to the win, which snapped a three-game losing streak.

Instead of entering Sunday’s contest with a four-game losing streak, the Mariners will have a chance to win their first series since taking two of three from the lowly Houston Astros June 10-12.

At 33-43, the Mariners are a game ahead of where they were after 76 contests last year, 32-44. Sunday, they’ll face Jarrod Parker, who is 1-1 against Seattle this season. A closer look:

The 30-year old Bonderman, a Kennewick, WA., native in his ninth major league season and first with Seattle, will make his fifth start and first against the Athletics. Bonderman had a rugged beginning with the Mariners, allowing seven earned runs June 2 against Minnesota, but has allowed just two earned runs in three starts since. He took no-decisions in his last two because the Mariners couldn’t score him any runs. He’s allowed nine hits over his past 14.0 innings.

The 24-year-old Parker, a Fort Wayne, IN., native in his third major league season and second with Oakland, will make his 16th start and third against the Mariners. Parker lost to Seattle 7-1 April 2, but came back to record a 4-3  win May 11 at Safeco Field. A first-round draft pick by Arizona in 2007, Parker has won his past four decisions.