Romar’s call for the first Washington alumni hoops game has drawn 12 Huskies players who drew paychecks in the NBA. They will be offering a serious game Sunday. 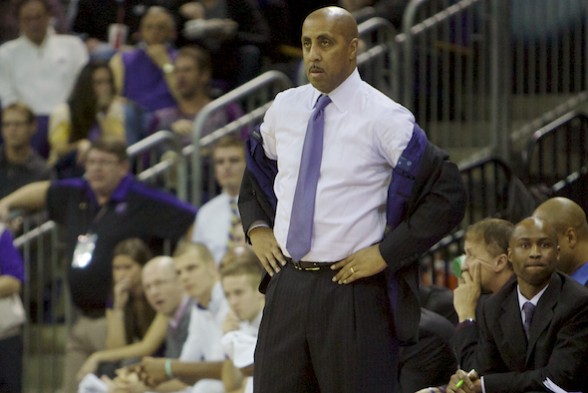 Lorenzo Romar will test his own legs when he plays in the Legends Game Sunday. / Drew Sellers, Sportspress Northwest

The collection of players that will gather Sunday afternoon at Alaska Airlines Arena at Hec Edmundson Pavilion would be sufficient to field an NBA playoff team, let alone comprise two of the four squads for the first-ever University of Washington Men’s Basketball Alumni Event.

The Legends Game, a warmup scrimmage between former UW players approaching eligibility for AARP, starts at 1 p.m.. The thought of running up and down the court had coach Lorenzo Romar joking Tuesday when reporters asked about his return to the hardwood. The 54-year-old will join former Huskies Eldridge Recasner, Donald Watts, Christian Dorsey and Paul Fortier, among others.

“I’m just going to try to make it through the first TV timeout. We won’t be pressuring the ball, I can tell you that,” Romar said.

The Alumni Game will be more uptempo. The rosters include 12 NBA players, all of whom Romar has coached during his 10 seasons with the Huskies. Most surprising was the unified response he received when he approached players and told them who would be on their team. Nobody wanted to play against Jon Brockman.

The other team has stars from Romar’s teams in the earlier part of the 21st century. Roy, Robinson, Hawes, Will Conroy, Bobby Jones, Mike Jensen, Tre Simmons, Hans Gasser and Jamaal Williams will play, barring last second changes. Romar also said the athletic department is working to bring Ryan Appleby back to compete in the 3-point contest.

Roy, who failed last season in his second comeback from multiple knee surgeries, will be healthy enough to compete at nearly 100 percent, according to Romar. That could pose an issue for the younger group of Huskies who used Twitter as a platform to talk trash in the weeks leading up to the game.

“What I’ve been joking is if Brandon decides this is like his last farewell, like when Magic (Johnson) did when he came back and played in that last All-Star game, then somebody is in trouble,” Romar said.

Those worried the main event will devolve into a typical all-star game with uncontested fast break dunks and olé defense needn’t worry. Romar expects a big crowd and a competitive atmosphere.

“This is a real game,” he said. “There are going to be officials, cheerleaders, band, the starting lineups, play-by-play. It’s a game. That’s what I really like about it.”