The Mariners, 10-inning winners over Oakland Sunday, will begin a two-game series with the Pittsburgh Pirates Tuesday night at Safeco Field. Seattle hasn’t faced Pittsburgh since 2007. 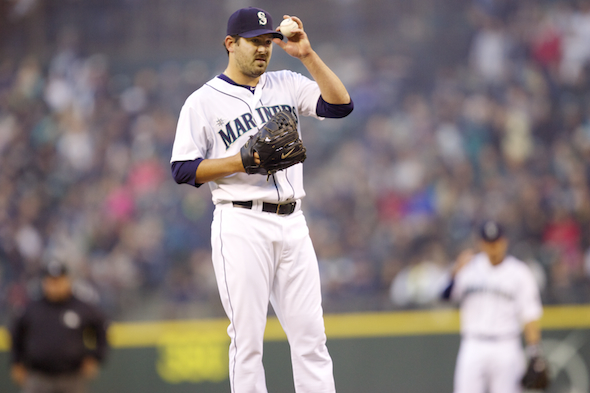 While the Mariners continue to have their ups and downs — they are currently on an “up” with a two-game winning streak — the Pittsburgh Pirates are enjoying a charmed season. As bad or worse than the Mariners for the past decade, the Pirates stand second in the NL Central with 46 victories — and second in all of MLB. Their two-game series Seattle Tuesday comes after a sweep of the Angels in Anaheim.

One reason for Pittsburgh’s success is the All-Star-caliber season that 25-year-old lefty Jeff Locke is having. A cameo pitcher in 2011 and 2012 when he largely was knocked around, Locke ranks second in the National League with a 2.01 ERA and is 10th in WAR at 2.4. He has held opponents to a .235 batting average on balls in play (second lowest in the NL) and allows 6.2 hits per nine innings, fifth best in the majors.

Locke, who has never faced the Mariners, has allowed zero runs in seven of his 15 starts, one run in three others and three hits or fewer eight times. In his six wins, he has allowed just one earned run. All the numbers that suggest Tuesday’s series opener shapes up as a pitching duel.

Lefty Joe Saunders has a 1.82 ERA over his past five starts, but won only twice thanks to limited run support, including a 1-0 complete-game loss in Anaheim Thursday. The 31-year-old is 10-2 with a 2.31 ERA in 16 career starts at Safeco Field.

After winning in 10 innings Sunday on Kendrys Morales’ 10th-inning walk-off homer, the first such hit by a Seattle batter since 2011, the Mariners again seek a third consecutive victory. They haven’t won three in a row since May 1-4.

The Mariners and Pirates are playing for the second time this season. The clubs split a pair at PNC Park May 7-8.

The 32-year-old Saunders, a Springfield, VA., native in his ninth major league season and first with Seattle, makes his 16th start and first against the Pirates. Saunders has a 1.82 ERA over his past five starts, but won only twice due to limited run support. In his last start at Safeco Field June 8, Saunders was backed by just one run in a 3-1 setback to the New York Yankees. Saunders is 10-2 with a 2.31 ERA in 16 career starts at Safeco Field, including 4-2, 2.53 this season.

The 25-year-old Locke, a North Conway, NH., native in his third major league season, all with Pittsburgh, will make his 16th start and first against the Mariners. He ranks second in the majors in ERA at 2.01. After losing his first start of the season to the Dodgers April 7, Locke has won six consecutive decisions. He also has eight no-decisions. The Atlanta Braves selected Locke in the second round of the 2006 amateur draft. The Braves traded Locke to the Pirates as part of a package June 3, 2009.