A turnaway crowd of 10,000 jammed sweltering Hec Ed Sunday to help the Huskies coach celebrate UW hoops past and land a hook in future recruits. 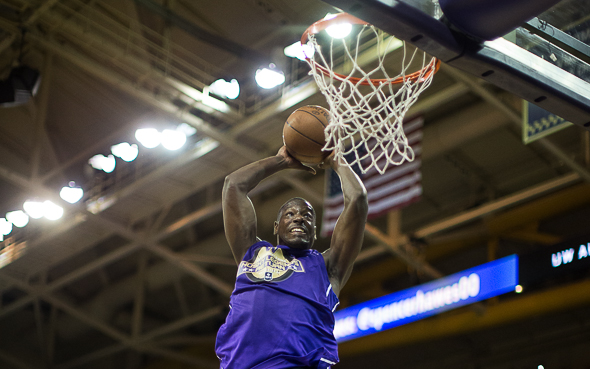 As a three-time Pac-12 Coach of the Year, Lorenzo Romar has excelled at making in-game adjustments. From the Huskies sideline, he exploits better than most an opponent’s weaknesses by helping his teams react quickly.

No wonder the same strategy succeeded Sunday in the Legends Game at the inaugural UW Men’s Basketball Alumni Event. The 54-year-old still looked like the NBA shooting guard he once was, and explained another part of  why he is the longest tenured coach in the conference.

In front of a sweaty sellout crowd at Alaska Airlines Arena at Hec Edmundson Pavilion, Romar won MVP honors at an event he created. And not just figuratively.

Three months after a mediocre season in Montlake, he re-energized the Huskies fan base by inviting back the players who once starred in Seattle’s basketball-crazed market.

No other conclusion seemed plausible hours after the arena PA announcer urged seated fans to squish closer together to make more room when Hec Ed already felt like a pressure cooker.

The heat during the Legends Game wore on Husky stars from the 70s, 80s and 90s, but Romar kept fresh. He knocked down three first-half treys, prompting Chester Dorsey (UW 1974-1977) to lock onto him defensively.

Romar began distributing in the second half, coming off the bench and finding shooters camped on the three-point line. He threw a one-handed, no-look pass he surely never taught his players in practice.

His step-back jumper inside the final two minutes clinched the win in a scrimmage where the final score meant little. Still, it looked as if he’d been saving the burst for weeks. Perhaps he wanted video to show future players the effort he demands as a head coach.

He certainly showed the nearly 10,000 in attendance that the four-hour production meant a lot to him. He wouldn’t allow it to devolve into the type of soulless all-star exhibition that most basketball purists would forgo for a dirt bath.

“Unbelievable,” he said of the support. “There is no way in the world I would have envisioned the (fans) being here like this.”

Lost amid the excitement accompanying the return to the 206 of Brandon Roy, Isaiah Thomas, Nate Robinson, Terrence Ross, and Hans Gasser . . .  er, Spencer Hawes, was the potential for the Legends and Alumni games to boost Romar’s influence in the Northwest. Producing nine NBA players in 11 seasons, after all, is no small feat.

“This can do a lot for recruiting,” Justin Dentmon said after scoring 11 points in 16 minutes in the alumni game.

Bringing back former stars to play in front of a packed arena when the atmosphere feels more like early March than late June was important, too.

To make the game, Quincy Pondexter took a 6 a.m. flight from Singapore via Tokyo. Matthew Bryan-Amaning came from London. Bobby Jones flew in a few days after his season with an Italian pro team came to an end.

The cheering during pre-game introductions sounded as if it was meant for a late-season tilt with UCLA.

“These people don’t come out to see some scrubs,” Romar said. “The way these guys handled their business while they were student-athletes here, the way they carried themselves, is the reason people are here.”

It was also why at least three touted basketball recruits were reportedly in-house to see Thomas score 24 points and take MVP in the Alumni Game. Dentmon won the 3-point shootout and Darnell Gant captured the dunk competition. Ross highlighted the latter with a memorable tomahawk jam.

The NCAA forbids Romar from speaking to the media about specific recruits before they sign a letter-of-intent, but he had no problem broadly addressing what the event could do for his program.

“Maybe they can see the type of support we have here for our student-athletes,” he said.

As long as the NBA continues to institute a “one-year-and-done” rule for college basketball, Romar will pursue new means to land another Ross. Or Robinson. Or Hawes.

Romar proved it’s not impossible to do it with class.

“Watching our guys have fun together and the camaraderie between all of them . . . This was one of the reasons we wanted to do this,” he said.

And a boost in recruiting? That probably played a role, too.