Notes from the disabled list: What a supposedly waterproof sportswriter thinks when he breaks his first bone, and the plant to break new ground. 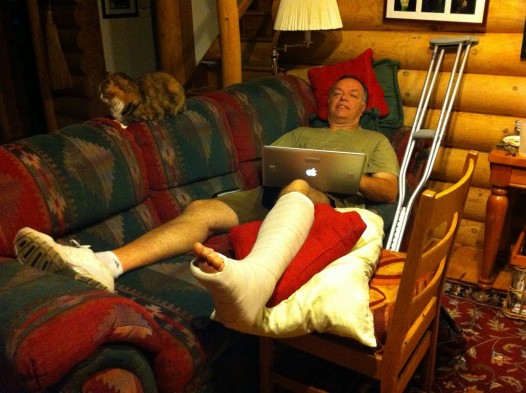 The cast, the cat and the can’t. / Julia Akoury Thiel photo

Nevertheless, a June monsoon Tuesday seemed a sufficiently unusual event to compel my descent down the back stairs for a look at just how much water a Puget Sound sky can unleash at full gash. Looking up meant I failed to look down to see the waterlogged final step.

Two seconds later, my odd slide left me in such pain that I had a Kevin Ware flashback. Remember the Louisville guard in the NCAA men’s tourney who landed awkwardly enough to break a leg bone that punctured his flesh and stunned the TV hoops nation?

Thought so. For several seconds I lay in the dampness, screaming, thinking the worst. Finally, as the astonished bridal unit, Julia, arrived in full WTF, I manned up and looked.

Whew. Nothing protruding. But my left ankle was swelling, swelling faster than I’d ever seen, as much as the pride of a Mariners hitter with an RBI (I know; just go along here and try to imagine).

Despite being a player of numerous sports as a youth, despite having skied in the woods, climbed up mountains and paddled down rivers, I had never broken a bone. Now I had, according to X-rays at Virginia Mason Medical Center and Group Health.

From a rain storm. At home. C’mon. Do fish drown?

Broken fibula, the doctor said. Might heal OK on its own. Might not. We can put in a plate and some screws to stabilize, he said.

I wondered to myself whether my ankle would be able to tell of pending changes in the weather, as some people claim of their body parts, healthy or damaged.

Then I realized: What difference would that make? I hurt myself volunteering to stand in the pouring rain.

“Screw it,” I said, offering an old phrase much used, but never this way. I get armored up Tuesday.

As I write this at home, cast propped high (“Elevate, elevate, elevate,” the nurse said), contemplating at least six weeks on crutches, two thoughts occurred: 1) Unlike Mariners DH Kendrys Morales, my new Brother of the Bad Break, I can still work while on the (semi-) disabled list, 2) I better get to it.

Sportspress Northwest’s operations manager, Tim Garrison, a relentless fellow who knows well the online content business, has been asking me for a couple of weeks to make the ask of our readers to contribute to the cause of not only preserving independent digital journalism, but to make it flourish. I put him off mostly because I was busy and partly because I don’t like asking for donations.

Well, I’m not going to as many games and press conferences in the next few weeks. The innawebs allow me to stay in touch through Bookface, tweeps, KPLU-FM, Crosscut.com and 1090TheFan.com. I’m not as busy, and Garrison knows I can no longer run away from him.

Readers can mock me for using my temporary incapacity as a sympathy appeal. But the donations panel went up a while ago. The broken ankle bone is just convenient violin music in the background.

To execute the idea, there is the belief that co-founder Steve Rudman and I have long held: There’s a robust community of sports followers here who value honest, experienced journalism done for the reader, not the teams, leagues or conferences. For the triumphs and foibles of Northwest sports, we are here to celebrate, criticize, provoke and laugh. And above all, make a profit. We know no other way to grow the next generation.

From a combination of investment, donations, ads, syndication, events, appearances and services, we will spend revenues forward, not backward into sinking print models or legacy debt. Shortly we will be publishing our first e-book, the first of several initiatives that respond to our reader survey of what you told us you wanted: More.

As the EMTs wheeled me out of the house for the ride to the X-Ray Room for Graceless Falls, Corey looked at the paperwork.

“I know you,” he said. “Sportspress Northwest. Seahawks.”

Amazingly, the throb seemed to cease. Or maybe it was just really easy to make my night.

Someday soon, someone soon will figure out the business model for quality local/regional journalism. Why not Seattle, now, us?

Meantime, someone do me a favor and connect the dots among super moons, June monsoons, Chip Kelly, Aaron Hernandez, Raul Ibanez’s 18 homers and Phil Mickelson’s six second-place finishes in the U.S. Open. Eventually, I’ll run out of Percoset, and I’ll want answers.