The Sounders, who have played only one match in the past two weeks, now play two games in a four-day span. After facing D.C., they travel to Vancouver. 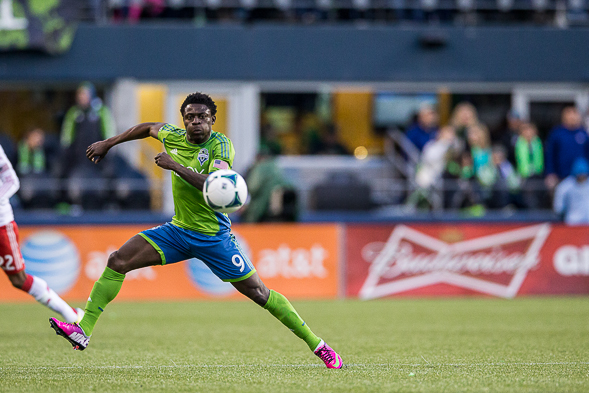 Obafemi Martins (9) has made a dramatic impact on the Sounders, who take on D.C. United Saturday at CenturyLink Field. / Drew Sellers, Sportspress Northwest

Carrying a five-match unbeaten streak, the Sounders return from the final bye week of the season with two contests in the next four days, against D.C. United at CenturyLink Field Wednesday at Vancouver Saturday. Although the Sounders are three points out of a playoff spot, they have played the fewest matches in MLS and have an opportunity to jump into third place in the Western Conference.

Wednesday’s match is the first of five in July and the only meeting of the year with D.C. United, the MLS bottom feeder with 11 points. With two games in hand on the rest of the league and a favorable schedule, the Sounders have a chance to make a big move this month.

Three of the five matches will be played at CenturyLink and both road trips — to Vancouver and San Jose — are short ones. In addition, just one of the five opponents currently hold a playoff spot, and two of the five — D.C. United and Chivas USA — have the lowest point totals in MLS. Since Seattle has already defeated five of its next six foes this season, the schedule couldn’t have been set up better.

Although the Sounders are coming off a 2-0 setback at Real Salt Lake, they have been hot at home, scoring 11 goals in their past three outings.

D.C. United is in the midst of a horrible year. Its 1-0 win over the Earthquakes June 22 marked the club’s first victory since March 9, ending a 13-match winless streak (0-10-3). D.C. is also winless (0-5-2) on the road, and ranks last in MLS with eight goals and seven assists. For D.C., the only positive is that both of its wins have come against Western Conference teams.

D.C. is led by Dwayne De Rosario and Lionard Pajoy, who each have two goals. De Rosario, who has 102 career goals and won the 2011 MLS MVP, leads the club with 33 shots, including 13 on goal. Pajoy, a Colombian-international in his second MLS season, hasn’t scored since April 21.

For the second straight match, head coach Sigi Schmid is expected to use Eddie Johnson, Obafemi Martins and Lamar Neagle, Seattle’s top three scorers, in the same lineup, Neagle as a wide midfielder. Schmid tried that at Real Salt Lake June 22 without any success.

Neagle, who has four goals and three assists, said he thinks the lineup can work.

Johnson and defender Brad Evans will be making their first home appearances since playing two matches for the U.S. National Team.

D.C. UNITED NOTES: D.C. is coming off a 1-0 home loss to the Vancouver Whitecaps . . D.C. United has not scored a goal from open play since a 1-1 draw with Sporting Kansas City May 19, a span of six matches . . . D.C. defender James Riley played in Seattle for three seasons (2009-11). Riley made 84 appearances with one goal and nine assists for the Sounders before joining Chivas USA in 2012.

COMING UP: Sounders have a short turnaround after D.C. United. They will travel to Vancouver for a Saturday match with the Whitecaps.