The Seattle Mariners will wear 1909 Seattle Turks throwback uniforms Saturday when the play the second of three games against the Cubs at Safeco Field. 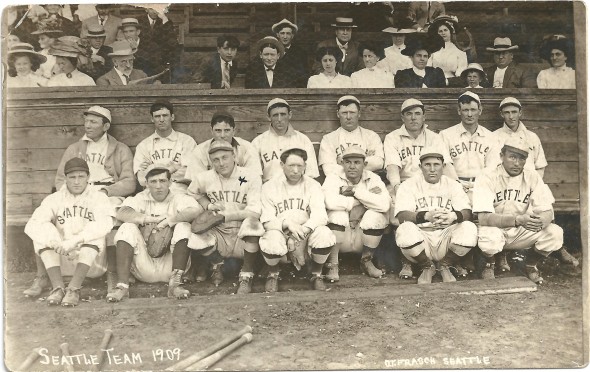 This is a photo postcard of the 1909 Seattle Turks, who captured the Northwestern League title with 109 victories. The Turks played at Yesler Way Park between 12th and 14th avenues. / David Eskenazi Collection

Dan Dugdale, a Midwest native who arrived in Seattle in 1898 intent on making a fortune to the Alaska gold fields, never did, instead staying in Seattle, where he bought ball clubs, built ballparks and pioneered the professional game. Baseball historians now properly credit Dugdale as the “father of professional baseball in Seattle.”

Starting in 1903, Dugdale owned a number of teams that went by numerous nicknames, including the Clamdiggers (1901-02) and Siwashes (1903-08). For the 1909 season, Dugdale changed his team’s nickname to “Turks.” They played at Yesler Way Park, an all-wood structure between 12th and 14th avenues. 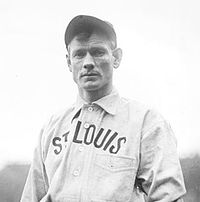 The Turks played in the Class B Northwestern League and, with their 109 wins, became the city’s first pennant winner since an 1898 Seattle team took the Pacific Northwest League title.

The Turks featured the Northwest League’s top two hitters in Pug Bennett (.314) and Emil Frisk (.307), and a pair of 20-game winners, Gus Thompson (26-8) and Frank Allen (20-6). The team also included an infielder named Lee Magee, who hit .264 in 150 games and would become notorious a decade later when, playing for the Cincinnati Reds, he conspired with all-time cheat Hal Chase to throw a game.

Magee ultimately confessed his role in the plot and was tossed out of baseball. Magee sued and the case went to court in 1920. During his testimony, Magee outed Chase, suspected of throwing more than one game during his career.

A grand jury investigated Chase and uncovered enough information on baseball betting in general that it began to probe allegations of fixes in the 1919 World Series. If Magee had kept his mouth shut and accepted his ban, there might not have been a Black Sox Scandal. But all of that was a long way off in 1909.

“It was a great day for owner Dan Dugdale, whose club won 109 games and lost 58, as Dugdale had been greatly humiliated at the end of the 1908 season when his team finished in last place,” Wee Coyle, a former quarterback under Gil Dobie at Washington and later the manager of Seattle’s Civic Auditorium and Civic Stadium, said in a retrospective of the 1909 season that The Times published in 1949. “Mayor John F. Miller decorated each player with a gold medal.”

While Dugdale’s 1909 club is generally referred to today as the Turks, Seattle newspapers of the time steadfastly avoided using the nickname in connection with the team in any of their game accounts.

The Turks featured seven players who either had, or would have, major league experience. Outfielder/pitcher Frisk, nicknamed the “Honus Wagner of the minors,” had the longest stay, 158 games with Cincinnati, Detroit and the St. Louis Browns, all before he joined the Turks.