Thiel: NFL could give birthday present to America

Minnesota rep calls out Goodell and Snyder on Redskins’ nickname: “Would they greet a group of tribal leaders by saying, ‘Hey, what’s up, redskins?'” 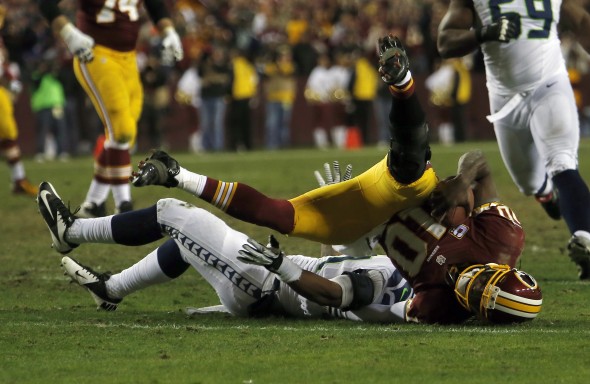 Pity the poor Redskins — they grossed only $373 million last season, hardly enough to pay for a decent playing surface that might have kept Robert Griffin III a little healthier. / Drew McKenzie, Sportspress Northwest

Today is the one day in which the relentless hectoring of government of, by, and for the people can be suspended. It’s America’s birthday, fercripesakes. Stop yelling.

So moved am I by the celebration of the fruited plain today that I will mark the occasion by giving unabashed, unsolicited credit to a government worker.

I do not know Rep. Betty McCollum (D-Minn.), but she said something last month in Congress that was so honest and righteous about a sports issue that is worthy of hailing. It was a tad less eloquent than the Gettysburg Address 150 years earlier, but hey, this is sports. At minimum she nobly advanced a bit of President Lincoln’s national notion about all being created equal.

She was responding to a June 5 letter sent by NFL Commissioner Roger Goodell to Congress in which he defended the continuing use of of the Redskins nickname by team owner Dan Snyder despite the request by 10 members of Congress that he knock it off because it is racist, insulting and breathtakingly stupid.

“The Washington Redskins name has from its origin represented a positive meaning distinct from any disparagement that could be viewed in some other context,” Goodell wrote. “For the team’s millions of fans and customers, who represent one of America’s most ethnically and geographically diverse fan bases, the name is a unifying force that stands for strength, courage, pride and respect.”

I don’t know whether McCollum first slapped her forehead or stuck a finger down her throat, but she eventually found a microphone.

“For the head of a multi-billion dollar sports league to embrace the twisted logic that ‘Redskin’ actually ‘stands for strength, courage, pride, and respect’ is a statement of absurdity,” said McCollum, co-chair of the Congressional Native American Caucus. “Would Roger Goodell and Dan Snyder actually travel to a Native American community and greet a group of tribal leaders by saying, ‘Hey, what’s up, redskin?’”

The issue of using a slur for a sports nickname has been condemned and defended for decades, but never has the foolishness been offered in a virtual theater format with protagonist and antagonist addressing each other directly. Bravo, Rep. McCollum. I could not let such plain truth be consigned to the dustbin of history marked “little noted nor long remembered.”

Far as I know, Goodell and Snyder have not answered the question, and probably will vacation on a moon of Saturn before they get anywhere near a direct answer. Snyder is, however, on record telling USA Today May 9 that “the Redskins will never change the name. It’s that simple. NEVER. You can put that in capital letters.”

Nothing new there. Snyder and all of his franchise predecessors, going back to the nickname’s origins in 1933, have dismissed the argument as nonsense or political correctness that is no match for sacred tradition. And every poll of fans/residents shows a vast majority disinclined to do anything about it.

A large segment of American society was once in favor of slavery, a tradition that went back about 200 years and helped build the empire. Then America thought better of it. So it’s not exactly unprecedented for American traditions to come to a richly deserved end.

Regarding polls, a majority view does not make a thing right. When the U.S. Supreme Court makes a decision, it doesn’t mean the court is right, merely that its decision is the law of the land. Even a majority of Native Americans who say they are unbothered by a slur doesn’t make it acceptable for those who are offended.

Sacred tradition aside, what we’re really talking about here is cost. Any sports team who changes nicknames will be out some coin. For a while.

“Any time you try to reinvent yourself or improve yourself or cater to the needs of some, you run the risk of ending up as new Coke,” David Carter, the executive director of the Sports Business Institute at the University of Southern California,.told the New York Times.  “You’re talking about a wholesale change of a global brand, and that’s pretty substantial. It really depends on how the new name is embraced. If they took something that people could rally around, then there might be tremendous upside.”

There is always an upside whenever teams changes uniforms, colors or nicknames. It’s done to sell new trinkets to a fan base of ready-made, renegade consumerists eager to consign anything made the day before Sunday to “old school.” Nothing lost temporarily cannot be gained back, and more. Snyder can ask his NBA neighbors, the Wizards. They used to be the Bullets until someone in crime-riddled Washington thought maybe that was a bad idea too.

As the Times pointed out, the Redskins grossed $373 million last season, which ended with a playoff loss to the Seahawks. The biggest expense, player payroll, was capped at $123 million. So the expense of re-branding is unlikely to break the bank, at least no more than it would cost to properly sod the home stadium so that players such as quarterback Robert Griffin III don’t get hurt.

After Goodell and Snyder greet actual redskins, maybe they can move on to explaining to the rest of the world what’s up with this “unifying force” symbol for the American capital city. Pu