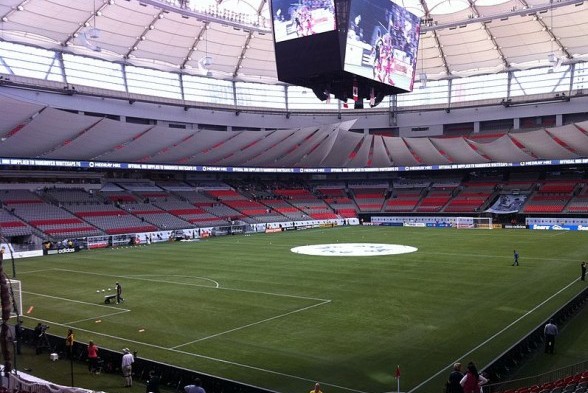 The Sounders play their second Cascadia Cup match of the season Saturday when they meet the Whitecaps at Vancouver’s BC Place. / Wiki Commons

After playing one match in two weeks due to a bye, the Sounders have a short turnaround from Wednesday’s 2-0 victory over D.C. United at CenturyLink Field. Seattle takes on Vancouver Saturday night in a Cascadia Cup contest and will face a Whitecaps team that has yet to lose (5-0-3) at BC Place this season.

“It’s a tight turnaround, but we are looking forward to it because we are looking forward to getting into the rhythm of playing games,” said coach Sigi Schmid, who will coach his 400th MLS game, a league record. “Things are fair (Vancouver played at Kansas City 9TWednesday). They have to travel a little bit further than we do, so from that standpoint it’s a good situation as well.

“We’ve had enough bye weeks, they clumped them all early in the season.  It will be the first season in a long time that we won’t have Champions League (Sounders didn’t qualify) and those games to add to the congestion.”

The Whitecaps (7-5-5, 26 points) have three wins and a draw in their last four matches. A major reason for their success is Brazilian playmaker Camilo, who has scored seven goals with two assists in his last five games. Vancouver is looking for its first Cascadia Cup win after falling to Seattle in the previous meeting June 8, 3-2.

Saturday will be the 131st all-time meeting between Seattle and Vancouver dating to 1974 when the franchises were in the old North American Soccer League. Seattle holds the advantage 63-46-21.

The Sounders have the early lead in the Cascadia Cup race with a draw and a victory at home. All three teams — Seattle, Portland, Vancouver — have played two games, with the Timbers drawing twice and the Whitecaps winless.

After playing four of six on the road last season, the Sounders have the home-field advantage this season with four Cascadia contests at CenturyLink Field. The Timbers will host two rivalry games while the Whitecaps are split with three home and three away.

Martin Rennie’s Whitecaps stand fourth in the Western Conference, two points ahead of Seattle and eight shy of Real Salt Lake for first place. Vancouver is unbeaten (5-0-3) at home and 19-9-14 in 42 all-time home matches. The Whitecaps, coming off a 1-1 tie at Sporting Kansas City, have just one loss (5-1-2) in their last eight outings.

“In recent games we have been a lot more forward thinking and a lot more dominant in the opposition’s half,” said Rennie. “We have players scoring goals and we are doing a good job putting them in positions to get chances. I just think the team is rolling in belief, but I also think earlier in the season we were playing well and not getting the results we deserved. But the players realized we are a good team and we have a good chance against anybody.”

In addition to Camilo, who has four career goals against the Sounders, Vancouver is led by forward Kenny Miller, a Scottish international who joined the Whitecaps last season. He has tallied five goals in seven starts and is third in MLS with 0.63 goals per.

The Whitecaps will be without midfielder Russell Teibert, who leads the club and is second in MLS with six assists, all coming in his last five games. Teibert has been called up to the Canadian National Team to participate on the CONCACAF Gold Cup. The Sounders expect to have back from injuries Ozzie Alonso and DeAndre Yedlin.

SERIES: Dates to June 19, 1974, when the Sounders met the Whitecaps at Vancouver’s Empire Stadium. The franchises have met 130 times while playing in various leagues, Seattle leading 63-46 with 21 draws. The most recent meeting was June 8 when the Sounders rallied for a 3-2 win at CenturyLink Field. After Saturday, the sides will meet again Oct. 9 in Seattle. Sounders FC is unbeaten against Vancouver in MLS play at 3-0-3, scoring multiple goals in five of the six meetings while recording two shutouts. Ten of Seattle’s 12 goals in the series have been scored in the final 45 minutes, with five goals scored in the final quarter hour.

VANCOUVER NOTES: The Whitecaps are coming off a 1-1 draw at Sporting Kansas City. After Aurelien Collin put Sporting ahead 1-0 in the 35th minute, Camilo tied it in the 45th. Vancouver earned one point despite taking just 10 shots to Kansas City’s 25.

COMING UP: Sounders play at San Jose July 13 and return to CenturyLink Field July 20 to host the Colorado Rapids.