#86: Special Start For Harang In Cincinnati

The Mariners, 5-4 losers Thursday, will play their first series at Great American Ballpark since 2002 this weekend, when this take on the Reds for three. 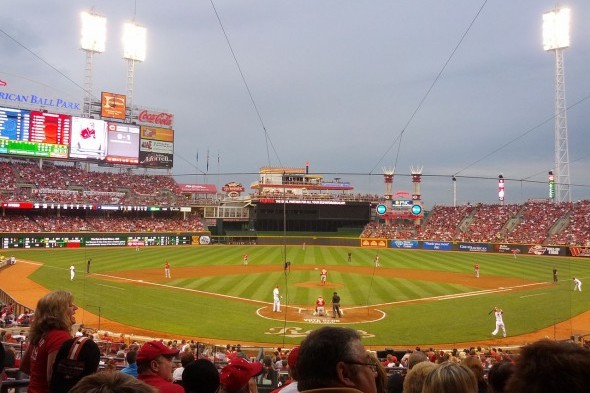 The Mariners play three against the Cincinnati Reds at the Great American Ballpark on the banks of the Ohio River. / Wiki Commons

Of all the starts Aaron Harang will make this season, none will of greater import to him than Friday’s, when he faces the Cincinnati Reds in the first of three games at Great American Ballpark. Harang pitched for the Reds for eight years (2003-10), winning 75 of his career total of 108 victories.

Although Harang has twice pitched against the Reds, once when he played for Oakland early in his career, the other when he was with the L.A. Dodgers (2012), he has never faced Cincinnati at the Great American Ballpark, where he went 37-39 before signing with San Diego in free agency Dec. 6, 2010.

He’ll take a nice stat into the game: Harang has one victory, two losses and three no-decisions in his last six outings, but he walked only four batters in those contests, a span covering 35.1 innings. He issued no walks in his last start, a no-decision against the Chicago Cubs.

The Mariners, 37-48 after losing 5-4 to Texas Thursday night in Arlington, are 8-1 all-time against Cincinnati, including 3-0 at the Great American Ballpark. Seattle’s last visit there came in 2002 when the Mariners swept a three-game series behind winning pitchers Joel Pineiro, Freddy Garcia and James Baldwin. That was the first series Ken Griffey Jr. played against the Mariners following his 1999 trade from Seattle to the Reds.

Harang, originally scheduled to oppose Mat Latos, will instead face Mike Leake, weather permitting. The Reds were rained out Thursday and more bad weather is forecast throughout the weekend. A closer look:

The 35-year-old Harang, a San Diego native in his 12th major league season and first with Seattle, will make his 14th start and first against the Reds. Harang has taken two no-decisions in his past two starts and will be seeking his first victory since June 11 when he defeated Houston with a complete-game shutout. He has allowed seven earned runs in his past three outings.

The 25-year-old Leake, a San Diego native in his fourth major league season, all with Cincinnati, will make his 17th start and first against the Mariners. Leake took a pair of no-decisions in his past two starts and won his two previous before that. In four games this season, he has not allowed an earned run. In his best start, he tossed 9.0 shutout innings May 15 at Miami.