#87: Bonderman Due For Turnaround Saturday

The Mariners, 9-1 all-time at the Great American Ballpark after Friday’s 4-2 victory, send Jeremy Bonderman to the mound Saturday to oppose Mat Latos. 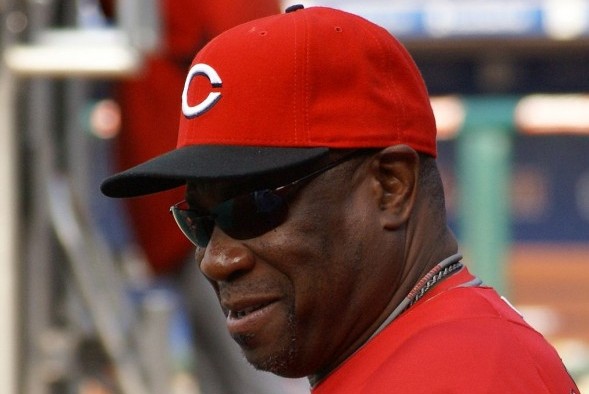 Cinnati manager Dusty Baker has the Reds in third place in the National League Central, 4½ games behind the division-leading Pittsburgh Pirates. / Wiki Commons

Jeremy Bonderman is 0-1, 6.23 ERA over his last two starts following a three-start stretch in which he dazzled with a 1-0 record and 0.90 ERA. Obviously still working out the kinks after missing 975 days (end of 2010 season) following Tommy John surgery, Bonderman will make his seventh start Saturday when the Mariners continue their three-game series against Cincinnati at the Great American Ballpark.

Game 1 couldn’t have been scripted better from Seattle’s perspective. Aaron Harang, who won 75 games in eight seasons for the Reds between 2003-10, made his first appearance at the Great American Ballpark and worked 6.0 effective innings and received stout support from his bullpen as the Mariners won 4-2.

Although the Mariners managed just six hits, two were homers (Nick Franklin, Michael Saunders) and two were triples (both by Brad Miller) as the Mariners improved to 9-1 all-time against Cincinnati.

Due to a Thursday rain-out in Cincinnati, Reds manager Dusty Baker was forced to re-configure his rotation for the series. Mat Latos, who was scheduled to pitch the opener, instead will go Saturday, pushing RHP Bronson Arroyo to Sunday opposite lefty Joe Saunders.

Latos has dropped two of his past three decisions but has seven victories. Hot as he’s been, Raul Ibanez probably isn’t looking forward to seeing Latos. Ibanez is 0-for-11 in his career against the right-hander.

The 30-year-old Bonderman, a Kennewick, WA., native in his ninth major league season and first with Seattle, will make his seventh start and first against the Reds. Bonderman, attempting to come back after two years of arm problems, had his shortest stint in his six starts when he went 3.1 innings, allowing six runs (four earned) against the Cubs last Sunday. The former Tiger has never pitched in Cincinnati.

The 25-year-old Latos, an Alexandria, VA., native in his fifth major league season and second with Cincinnati, will make his 18th start and first against the Mariners. Latos has lost two of his past three decisions and is coming off a 3-2 loss at Texas. He has worked into the seventh inning 10 times. He had his two best starts April 24 and April 29 when he did not allow an earned run in either outing. He had a season-high 13 strikeouts June 23 at Arizona.