Snafu slows down fans, but Sounders up to speed 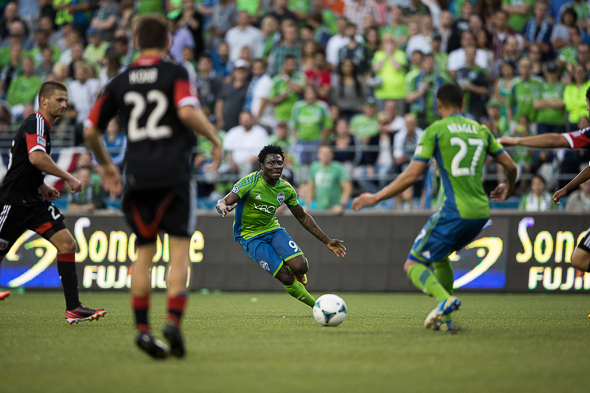 Obafemi Martins did all of the scoring in the Sounders’ 2-0 win over D.C. United Wednesday. / Drew Mckenzie, Sportspress Northwest

All Sounders fans entering CenturyLink Field Wednesday were greeted by a new metal-detector wave-down before kickoff against D.C. United. Twenty minutes before kickoff, the lines were long. Fans kept standing, in fact, until the match started. One cluster stretched south of the WaMu Theater.

Nearly half of the 39,180 in attendance didn’t enter the stadium until 15 minutes into Seattle’s 2-0 win over the worst team in the Eastern Conference.

Not exactly the best way to celebrate the fans who double the average attendance at most MLS games. The club announced Thursday a new security measure that requires every spectator be checked with a wand. However, the system was nowhere near ready to implement.

“The process is smooth and moves quickly,” said Sounders FC President Peter McLoughlin when the club announced the move.

In the 19th minute, midfielder Brad Evans saw Martins cutting through the center of the pitch. His pass was quick and on target and Martins broke away, his shot lining into back left corner.

“It was a great run by (Martins),” said Evans after recording his third assist of the season. “I was able to squeeze it through a small gap and the finish from there was top class.”

Martins’ ensuing backflip was just as impressive, even if it did make coach Sigi Schmid look away.

“He’s been doing it a long time,” Schmid said, fresh off knee surgery, his 399th MLS game as coach just completed. “Better him than me. If I did it it would be a seismic occasion.”

It was at the least a joyous one for a Seattle team that entered sixth in the Western Conference standings.

“I think tonight was one of those games that you just have to grind out,” Schmid said. “I don’t think it was necessarily our best soccer.”

Though the Sounders (7-5-3, 24 points) were ready to handle D.C. United, a club winless this season on the road (0-6-2) and without stars DeWayne De Rosario (hip flexor) and Nick DeLeon (injured ankle).

United challenged the lead only in a last late push, thanks in part to a Sounders backline that tired after 10 days off.

“I don’t know, I don’t know,” goalkeeper Michael Gspurning said when asked why his club nearly faltered late. “Washington was playing like they were last in the standings and they won a lot of duels.”

Despite the momentary surge, the most anemic offense in the MLS was unable to add to its one road goal this season. In games played away from Washington D.C., United is scoreless in 720 consecutive minutes.

Martins’ last goal came in the final minute of stoppage time — every fan was there to see it — a shot past goalkeeper Joe Willis that Martins punctuated with double fist pumps.

The win pushed the Sounders to 4-2-0 in their past six, extended their home unbeaten streak to six and moved them to 4-1-2 at home overall. The Sounders have won their past four matches at CenturyLink Field and Gspurning quietly recorded his sixth shutout of the season. Since 2010, Seattle is 32-0-8 when it scores first.

Those are the stats Schmid likes to hear as Seattle enters a July stretch crucial to improving its playoff hopes.

“You have to find different ways to win games throughout the season, and today I thought we accomplished that.”

Notes: Midfielder Mario Martinez remained absent from the team, further calling into question his MLS future. Schmid Tuesday said he wanted to keep Martinez past June 30, when the terms of his loan from his team in Honduras were set to end. Martinez last week stirred controversy when the Honduras national team announced he made its roster days before the CONCACAF Gold Cup, which will run July 7-28 . . .DeAndre Yedlin did not play, thanks to the separated shoulder he suffered last month playing for the U.S. under-20 national team.