The Mariners lashed 15 hits, including Raul Ibanez’s 22 homer in an 11-4 win Monday night, to back Felix Hernandez’s 14th quality start and ninth win. 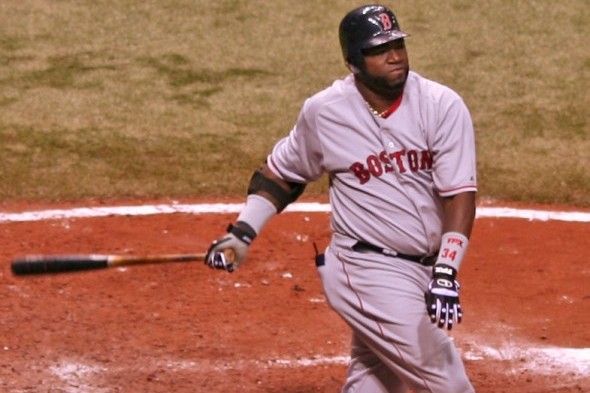 Boston’s David Ortiz, who went 2-for-2 with a walk Monday, made nine American League All-Star teams and hit 418 home runs since the Mariners traded him to Minnesota in late 1996. / Wiki Commons

The Mariners have traded multiple players who developed into All-Stars for other clubs, but only three apt to become members of the Hall of Fame. The stories behind the Ken Griffey Jr. (1999) and Randy Johnson (1998) swaps to Cincinnati and Houston, respectively, are well documented, the tale of David Arias less so.

On Sept. 19, 1996, the Mariners sent Arias, then playing for their Class A affiliate in Wisconsin (Timber Rattlers), to Minnesota to complete a deal they made Aug. 29 to acquire third baseman Dave Hollins. The Mariners figured Hollins was the bat they needed for a pennant push.

Hollins didn’t disappoint. In 28 games, he hit .351 and drove in 25 runs, but his contribution couldn’t get the Mariners into the playoffs. Following the 1996 season, Hollins signed as a free agent with the Angels. A year later, Arias made his major league debut with the Twins.

Changing his name to David Ortiz, he developed into “Big Papi” and hit 418 home runs (17 this season) and made nine All-Star teams since, making Arias/Ortiz for rent-a-player Hollins the closest equivalent to “my kingdom for a horse” in Mariners history.

Seattle’s Tuesday night starter, Hisashi Iwakuma, a newly minted All-Star, has not yet faced Ortiz or the Red Sox, who were steamrolled by the Mariners Monday night 11-4 in the first game of a four-game series at Safeco Field. Seattle produced a Red Sox-like 15 hits, including Raul Ibanez’s 22nd homer, a rare, three-hit game by Justin Smoak, three RBIs by Michael Saunders and another quality start by Felix Hernandez (9-4).

Compared to his torrid start (7-1, 1.79), Iwakuma has been out of sorts for three weeks. He’ll oppose Allen Webster, who will be making his sixth major league start and first against Seattle.

Again — for the ninth time — the Mariners have a chance to win three in a row, a feat that has eluded them since May 1-4.

The 32-year-old Iwakuma, a Tokyo native in his second major league season, both with Seattle, will make his 19th start and first against the Red Sox. Iwakuma has allowed four runs in each of his last four outings, going 0-3 with a 5.76 ERA in that span to take some of the luster off an outstanding start (7-1, 1.70). He’s been dominant at Safeco Field (3-1, 1.84 ERA in nine starts).

The 23-year-old Webster, a Greensboro, NC., native in his first major league season, will make his sixth start and first against the Mariners. Webster spent part of April and May with the Red Sox, then was shipped out to AAA Pawtucket to mull over his 11.74 ERA. When he returned June 22, he was knocked around for five earned runs. But he won his past two and appears to have righted himself.