The Mariners, who conclude their four-game series with the Red Sox Thursday, have allowed 22 runs on 28 hits in back-to-back losses to the AL East leaders. 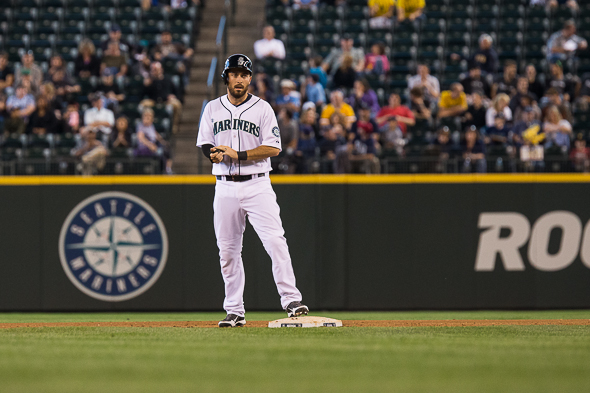 According to available intelligence, the Mariners will probably summon 23-year-old RHP Erasmo Ramirez to take Jeremy Bonderman’s turn in the rotation Thursday when Seattle and Boston conclude their series in a 12:40 p.m. matinee at Safeco Field. Ramirez couldn’t be blamed if he refused to report.

In the first three games of the series, the Red Sox battered Seattle pitching for 26 runs on 38 hits — 22 and 28 of those, respectively, the past two nights while recording 11-8 and 11-4 victories. Former Seattle farmhand David Ortiz alone is enough to scare off Ramirez: He’s 8-for-10 (.800) with five RBIs and five runs scored in the series.

Then there is the matter of Ramirez’s mound foe, Ryan Dempster, a 36-year-old in his 16th major league season. While Dempster hasn’t been flashy — he had a 3.55 ERA over six starts in June — he hasn’t allowed more than three runs in a game since May 23 and will be looking for his eighth quality start in nine outings.

Ramirez was in contention to join Seattle’s rotation coming out of spring training until elbow issues removed him from consideration. Although he’s coming off two less-than-stellar starts for the Rainiers, he’s generally been effective with a 3-3 record with a 3.09 ERA.

Last season as a rookie, Ramirez made 16 appearances with eight starts for the Mariners, especially showing potential June 25 against Oakland when, in a 1-0 loss, he fanned 10 and walked one. He had an impressive strikeout-to-walk ratio (48-12) and in his eight starts averaged 1.53 free passes per nine. In his first seven starts, a stretch covering 19.2 innings, he walked only four batters.

Ramirez’s lone start against the Red Sox June 20 took an unfortunate turn. After holding Boston hitless for 2.2 innings at Safeco Field, Ramirez was forced from the mound and went on the 15-day disabled list with a right elbow flexor strain. He did not return to the majors until Sept. 7.

Now Ramirez is back — maybe, probably. Since the Red Sox shredded Seattle’s bullpen the last two nights, the Mariners need Ramirez to work deep into Thursday’s game. Given Boston’s lineup, it’s hard to tell whether Ramirez is being promoted or sacrificed.

The 23-year-old Ramirez, a Nicaragua native in his second major league season, both with Seattle takes the spot in the rotation vacated by Jeremy Bonderman, designated for assignment Monday. Ramirez placed himself into contention to break camp with the Mariners in March when a triceps injury kept him sidelined until late May. At AAA Tacoma this season, he’s gone 3-3 with a 3.09 ERA in seven starts covering 43.2 innings. With the Mariners last season, Ramirez went 1-3 with a 3.36 ERA in 16 games, including eight starts, covering 59.0 innings.

The 36-year-old Dempster, a British Columbia native in his 16th major league season and first with Boston, will make his 19th start and first against the Mariners. Dempster, who won a career-high 17 games while pitching for the Cubs in 2008, is coming off a pair of no-decisions. He has allowed three or fewer runs 13 times in 18 starts and has a streak of eight consecutive quality starts.