After going 0 for 2 in pursuit of sports teams for this winter, the Seattle imagination wanders to how it came to be, and how it might continue to be. 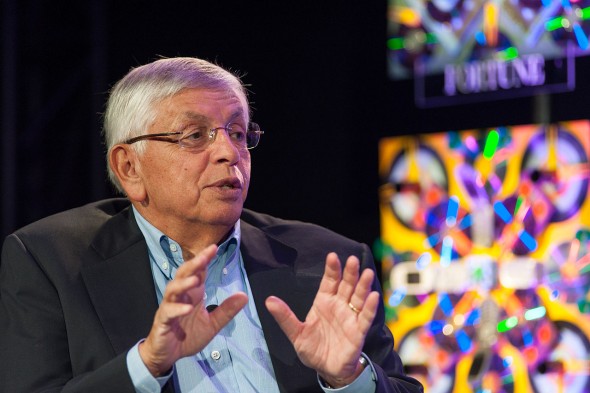 NBA Commissioner David Stern may not like Seattle, which does not mean it isn’t useful to him. / Wiki Commons

Stern: Good to hear your voice. Did you get away for the holiday weekend?

Bettman: Yeah, but not what I wanted to do. I had to fly out to Phoenix to personally shake down the Glendale City Council. The politicians were close to rejecting the tax subsidy we arranged to keep the Coyotes there.

Stern: I saw the news. Congratulations. They weren’t going let the team go, you knew that.  You took my advice.

Bettman: Don’t I always? As you said, Seattle was a big help. If Glendale hadn’t seen the desperation in Seattle to get the Kings, they might have stood up to us.

Stern: Remember when I told you that an empty Seattle market was a commissioner’s best friend? Our colleagues in the NFL have proven the concept many times with Los Angeles.

Bettman: Now I see the Rams were told to drop dead by the politicians in St. Louis after the Rams demanded $700 million in upgrades to the domed stadium. People are already writing that the Rams should be relocated back to LA after the lease expires in 2014.

Stern: Sometimes it’s too easy. We don’t even have to say anything. The media does the heavy lifting for us.

Bettman: Well, it wasn’t easy in Glendale. The economy is still hurting, there’s not much development near the arena, the city is already are behind on payments to the team, politicians were elected on no-subsidy —

Stern: Blah, blah, blah. They always cave. You’re a monopoly operator, Gary — just like me. Act like it.

Stern: You always need an exception to prove the rule. Seattle wouldn’t pay to subsidize a new arena, so the town paid for it by losing the Sonics, and now look at them — creating an arena deal that’s mostly private, making a ridiculous offer for one of our weakest franchises that drove up all franchise values, then bidding against themselves when Sacramento’s plan wasn’t even close to Seattle’s. Then Sacramento sold out to us with an arena proposal it could hardly afford, but just like Glendale, was neurotic enough to feel  that losing the team would be a PR disaster. Once Seattle demonstrated its desperation for our last free-agent franchise, it set our agenda for every current and future market.

Bettman: That gets me around to why I called. I saw a story in the Houston Chronicle last month that quoted you as saying you kept a “little green book” that had a list of cities besides Seattle that could respond pretty quickly to an offer of expansion. You said there’s all kinds of stuff going on in Pittsburgh, Columbus, Louisville, Virginia Beach, Las Vegas, Vancouver, Mexico City, Kansas City.

Stern: Of course not, with the exception that some public official in each of the those towns has talked up the idea of seeking an expansion team. Once Seattle’s bid was voted down, it pulled the lid off the expansion idea. All it takes is a well-planted rumor to make a competitive market. Forcing the conversation to expansion — which always came from them, never us —  means other cities, which know any league prefers tandem teams for scheduling purposes, are on alert to be the second team. Not only will these cities knock themselves out competing with each other to be the second team, they’ll keep the pressure on Seattle not to go backward on the arena deal. And the empty market keeps the pressure on existing NBA cities to knuckle under or they’ll be the next Seattle.

Bettman: So you’re getting a second use out of Seattle.

Stern: Exactly. And it doesn’t have to stop with two uses. But beyond that will be Adam Silver’s goal. As long as Chris Hansen and Steve Ballmer remain ambitious and engaged — their deal with the city and county was for five years — they have set the bar for what every market must do to secure an expansion team.

Bettman: Isn’t that a little blatant?

Stern: Sure, but so what? Most fans don’t get it; they just want a team. And if after five years, Hansen and Ballmer say the hell with it, big deal. The NBA has gotten along just fine in the five years without Seattle in the league, and secured better deals for the Kings and any other franchise that that might have lease trouble. Plus, Hansen and Ballmer helped us get rid of the Maloofs.

Bettman: Well, now that each of us has a new collective-bargaining agreement we can work with, and we finally have a new owner and a new lease in Phoenix and will move the Islanders to Brooklyn, I don’t think either of us has a team in a city where profitability is so unlikely that relocation is viable.

Bettman: I’ll leave it to you play the expansion game, which we’re not doing for a long time.