Losers of three in a row, the Mariners begin their final series before the All-Star break Friday when they play the first of three against the L.A. Angels. 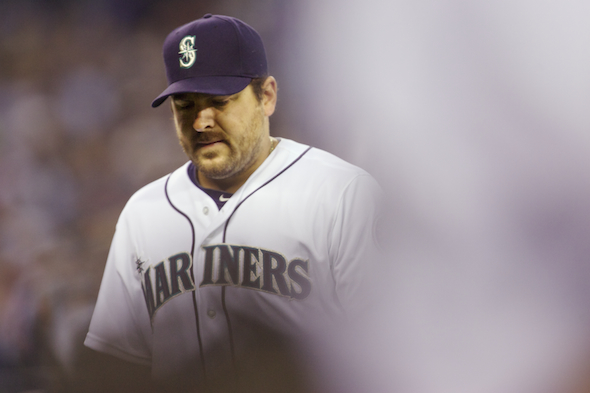 Lefty Joe Saunders, coming off a nice effort at Cincinnati, has yet to beat the Angels, his former team, in two tries. He’ll get another chance Friday night. / Drew Sellers, Sportspress Northwest

Expected to contend for, if not win, the AL West, the Los Angeles Angels will instead reach the All-Star break as the division’s most underachieving team. Even if they sweep all three weekend games from the Mariners, the Angels will finish the first half only one game above .500, certainly not what they had in mind when they signed free agent Josh Hamilton to a contract valued at $125 million.

Hamilton struggled early, endured injuries, recovered slightly, but still hasn’t come around. He will enter the final series before the All-Star break batting .229 and with an on-base percentage of .289, making him leader in the clubhouse for free agent bust of the year.

Had Seattle GM Jack Zduriencik had his way, Hamilton would have been a Mariner. Zduriencik’s inability to lure Hamilton last winter likely saved Zduriencik’s job, but Zduriencik does not wiggle off the hook entirely. He and manager Eric Wedge were supposed to have delivered at least a .500 team this season, but haven’t. Not that they still can’t, but overcoming the deficit they already face in the AL West — 14 games — will be a tall task.

Joe Saunders starts the process of ending the first half on an positive note when he faces the Angels Friday. Saunders is working on his longest winning streak of the season — two games — and will oppose Jerome Williams, who is 4-1, 2.74 in five career starts against the Mariners, including 2-0, 3.98 at Safeco Field.

The last time Williams pitched against Seattle, May 21, the Angels breezed 12-0, Seattle’s worst erasure of the campaign.

The 32-year-old Saunders, a Fairfax, VA., native in his ninth major league season and first with Seattle, will make his 19th start and second against the Angels. Saunders has yet to beat his former teammates in two tries, though he’s allowed just three runs in 14 innings in two losses, including a 1-0 complete-game setback June 19 in Anaheim. Saunders held the Reds to one run in seven innings in his last outing.

The 31-year-old Williams, a Honolulu native in his eighth major league season and third with the Angels, will make his 12th start, 23rd appearance and second against the Mariners. Williams has split the 2013 season between L.A.’s rotation and bullpen, and has been in the rotation exclusively since June 12 when he defeated Baltimore 9-5. He had his best start May 21 when he defeated Seattle 12-0 at Angels Stadium.