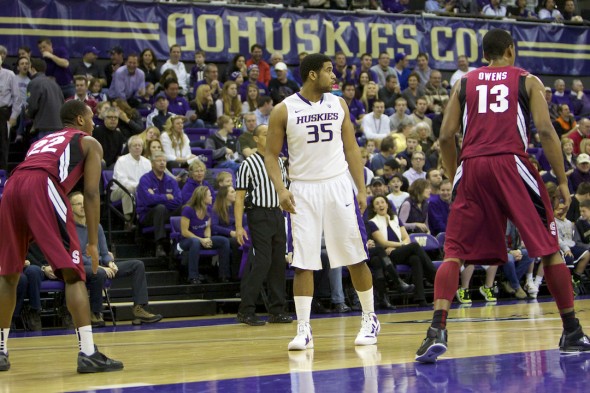 Austin Seferian-Jenkins pleaded guilty Monday to a gross misdemeanor DUI charge, owes $7,585 in fines, will spend a mandatory minimum one day in jail and be on probation five years. Washington’s premier tight end has been suspended from team activities since shortly after March 9, when he drove his car into a Seattle ditch and smashed his face into the windshield. Isn’t that enough?

No. He needs to sit out two games.

We all know that the college football landscape is changing at warp speed, thanks to money from TV that is sufficient to make independent states out of big-time programs. Changing nearly as fast is the public attitude toward DUI, especially in this town, where DUI-related vehicular homicides following Seferian-Jenkins’ episode took three lives and injured four others.

The trends have intersected at the desk of head coach Steve Sarkisian. He has a chance to make a statement that suggests that college football is still tethered to reality.

Public opinion will be all over the map. Some Huskies fans, lathered about the season and the remodeled stadium, want the season to be a step up, and Seferian-Jenkins, 20, is among a handful of UW’s difference-makers. At the other end are crusaders against drunk driving who may think that the loss of a full season for DUI is the only statement powerful enough to be a high-profile deterrent.

In the middle is Seferian-Jenkins, who did a stupid thing and was lucky to have not been injured seriously, or to have harmed others. Predictably, he seems mortified and contrite. He changed his plea in Seattle Municipal Court Monday morning from not guilty to guilty and had a statement issued through his attorney, Bill Kirk:

“On March 9, 2013, I fell well short of what is expected of me as a student athlete and a citizen of this community,” the statement read. “I want everyone to know how sorry I am for the disappointment and embarrassment that I have caused. I especially want to apologize to my teammates, my coaches and particularly my family. I also want to apologize to the entire University of Washington family for not living up to my expectations. I hope that everyone can learn from my mistake so that they do not commit the same lapse in judgment that I committed this past March.

“I was always raised to be a man of my word, and I promised everyone shortly after this incident that I would accept responsibility for my actions. Today, I kept my word and will accept my punishment because I deserve it. I also want everyone to know that I will continue to learn from this mistake and will attempt to educate others to the dangers of drinking and driving.

“I understand that I am very fortunate that no one else was injured by my terrible lapse in judgment. To all my supporters, thank you for standing by me, but please learn from my mistake and never, ever drink and drive. I plan to move on from this, and continue to work hard to earn your respect back. Again, I am deeply sorry for my actions and I hope that at some point, you can all forgive me.”

A well-crafted expression, and I have no reason to doubt Seferian-Jenkins’ sincerity. But forgiveness is a decision for each individual. Public safety, meanwhile, is in increasing jeopardy, despite all the awareness, counseling, hectoring and tragedies involving impaired driving.

The Seattle City’s Attorney’s office, which handles misdemeanors, filed 1,498 DUI cases in 2012. The year before, there were 1,207. Clearly the message isn’t getting across. Gov. Jay Inslee has introduced a bill in the Legislature to toughen DUI laws.

The increase is burdensome in Seattle, which has only 30 probation officers to deal with all probation cases, not just DUI. The officers are charged with following up with court orders on conditions such as ignition interlock devices that prevent drinkers from driving. But the numbers overwhelm the staffers, and people get away.

“We’ve got the laws,” Eric Michl, a member of Seattle Police’s DUO squad, told seattlepi.com. “We just need the resources to enforce them.”

But the city has only 30 probation officers, and they handle much more than just DUI cases.

“I think they’re a great group of people doing the best they can with limited resources,” Michl said. “We need more resources.”

They need more resources — and they need smaller caseloads. That’s where Sarkisian can do his part. He has the discretion, subject to approval of athletic director Scott Woodward, to influence directly the 100-plus athletes in his charge, and by extension the thousands who pay attention to their activities, by sitting his star for two games instead of the expected one.

Sarkisian already has at least one Husky who didn’t seem to get the original message from Seferian-Jenkins’ screw-up. Teammate Kasen Williams was arrested and cited for underage drinking at Lake Chelan in May after driving 45 mph in a 30 mph zone.

There was a time when Williams’ misdemeanor would have been shrugged off as a boys-will-be-boys episode of youthful indescretion. That time has passed.