Losers of two shutouts in a row, the Sounders received some good news Monday when defender DeAndre Yedlin was named to the MLS All-Star team. 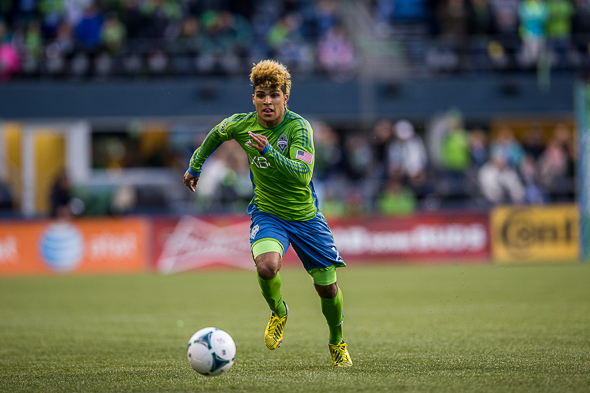 Sounders defender DeAndre Yedlin was named to the AT&T MLS All-Star roster, the league announced Monday. The MLS All-Stars will compete against AS Roma July 31 at Sporting Park in Kansas City. A rookie, Yedlin, 20, Seattle’s first “homegrown player,” was  one of two additions to the All-Star team by MLS Commissioner Don Garber.

Yedlin signed after attending Seattle’s O’Dea High School and the University of Akron while also participating in the Sounders FC Academy and U-23 programs.

He is the youngest player in club history to play a complete game and record an assist. This season he has logged 1,180 minutes (fifth on the club) and he has started 13 of the club’s 17 regular-season matches.

Yedlin is Seattle’s lone representative on the All-Star team. Osvaldo Alonso earned All-Star honors the past two seasons, and Eddie Johnson was named to last year’s team. Kasey Keller earned the honors from 2009-2011, Fredy Montero was named to the team three times (2009, 2010 and 2012) and Freddie Ljungberg was honored in 2009 and 2010.

Because of the competitive format — MLS vs. the World — of the All-Star Game, MLS asked All-Star head coach Peter Vermes to select from among all available players. Vermes selected all 11 of the original fan-voted All-Stars. Nine roster selections are MLS All-Stars for the first time, with 12 of the 19 MLS teams represented.

The Sounders, blanked in consecutive matches by Vancouver (2-0) and San Jose (1-0), will host the Colorado Rapids Saturday at CenturyLink Field. Kickoff is scheduled for 1 p.m.