Play of Sounders’ Yedlin catching up to his hair

DeAndre Yedlin is the first Sounder to climb from the club’s U-18 club to land a roster spot. Now an All-Star, his style and play have earned him a devoted following. 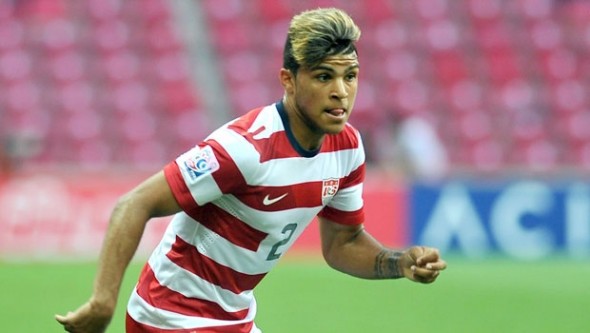 DeAndre Yedlin garnered praise for his play with the U-20 U.S. Men’s National Team earlier this season. / SoundersFC.com

Descriptions of DeAndre Yedlin typically begin and end with his hair.

Oh, that hair. It looked earlier in 2013 like the Spartan helmet adorned by King Leonidas in “300.” Except it was burnt orange.

Named Monday by the MLS commissioner to the All-Star team, the 20-year-old Sounders defender has in his rookie season rocked a gerry curl mohawk, a spiked surfer fade and racing stripes on the side of his head.

The look demands attention. Now his play does, too.

Two years removed from starring at Seattle’s O’Dea High School, Yedlin in 14 MLS games has collected a following of fans and hecklers, solidified his place in Seattle’s starting lineup and provided personality to a low-profile league in need of star power.

Yedlin wears capri pants. And pulls it off. He’s not even from Europe.

“He’s only the second homegrown (MLS player playing in his home market) to have made the All-Star team,” coach Sigi Schmid said Tuesday. “So from that standpoint, it’s a tremendous honor for him and for our organization.”

Not bad for a right back that can’t legally enjoy a beer.

“It’s been a pretty amazing ride, and at times it can get a little bit overwhelming,” Yedlin said.

Meteoric is Yedlin’s rise from dominating the 3A Metro League to scoring in Champions League matches and providing steady back-line defense for a pro club pushing to make the MLS playoffs. In 2010, he starred for the Sounders U-18 Academy team, then spent two years playing for the University of Akron, earning First-Team All-MAC honors as a freshman and sophomore.

He grew up in Shoreline, raised by his grandparents, Ira and Vicky. His uncle, Dylan, introduced him to soccer when he was three. Yedlin doesn’t mind discussing his diverse ethnicity nor his unique upbringing. He’s one-quarter black, one-quarter Native American and half-Latvian. He has never met his father, and only recently has his mother begun to a play a more prominent role in his life.

“My grandparents were my main guardians growing up, so I’m pretty thankful for them,” Yedlin said.”At the time I don’t think my mom would really be able to afford soccer, so I’m blessed to have had them in my life.”

Also blessed was Sounders general manager Adrian Hanauer with the wisdome to sign Yedlin in January, making the five-foot-eight, 150-pounder a foundational member of a club trying still to discover an identity in its first season without Fredy Montero.

Yedlin developed part of his style — not his fashion sense — at O’Dea.

“It’s all-guys. It’s very disciplined,” Yedlin said of the private Catholic high school. “It taught me how to be a gentleman. That’s what they’re trying to do — get gentlemen. I think they did that well with me.”

The teachings helped him land his girlfriend, Mackenzie, with whom he sometimes likes to escape to Leavenworth, spending long weekends free from the growing profile he created in a soccer-crazed city.

The on-field discipline came naturally. Yedlin’s speed makes him the rare defender who can double as an attacking threat. The tattoos and the hairstyle are new — the latter changing from week to week.

“He does whatever he wants,” forward Lamar Neagle said. “I told him that’s marketable, man. Whatever’s working for him. I say don’t fix it. The fans love it.”

Brad Evans and Eddie Johnson left, too, though they played for Jurgen Klinsmann’s senior U.S. Men’s National Team. Their absences and the combination of injuries to Osvaldo Alonso, Steve Zakuani and Michael Gspurning accounted in part for Seattle’s uneven first half of the 2013 season, contrasted by dominating home wins with lifeless road losses.

Klinsmann Wednesday again called on Johnson to join USMNT a day after it beat Costa Rica 1-0 to top Group C in the CONCACAF Gold Cup. Seattle’s constant roster turnover has increased pressure on Yedlin, who is trying to manage fatigue during the most demanding playing schedule of his young career.

“Right now, it’s probably the most difficult patch that he’s gone through, because the season for him is the longest season he’s ever been involved in,” Schmid said. “It’s beyond what a college season would have been. With the U-20’s, it’s just a lot of soccer.”

Perhaps the hectic schedule finally affected Yedlin July 6 during the final minutes of Seattle’s 2-0 loss to the Vancouver Whitecaps. He entered the game as a substitute and immediately lost his mark — Whitecaps forward Darren Mattocks juked him and scored in the 79th minute.

“It’s just something I got to learn. I need to close down guys a little bit tighter,” Yedlin said Monday.

Just as critical will be accepting the early accolades without acquiring the complacency that can derail a career. He is the first rookie to make the MLS All-Star Team since 2005.

Neagle, a Federal Way native, doesn’t think that will be a problem. Yedlin does, after all, drive a 2002 Subaru with more than 250,000 miles on it.

“I like that he’s a humble kid. You like to see good things happen to good people,” he said. “He’s one of my best friends on the team right now and I’ve only known him for a few months. That speaks volumes in itself. I’ve known other guys for years.”