The Mariners, having won the first two games of the Houston series, can record their second consecutive sweep Sunday when they meet the Astros at Minute Maid. 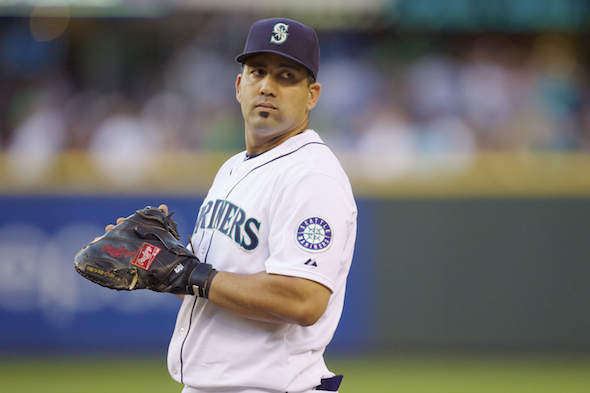 Kendrys Morales, batting .277, and the Mariners will go for a series sweep against the Houston Astros Sunday at Minute Maid Park. / Drew Sellers, Sportspress Northwest

Unless the Mariners can make up considerable ground — they’ve given it a good shot in recent days with a season-high five-game winning streak — Hernandez stands a chance of becoming the first pitcher to win two ERA titles throwing for losing clubs.

He  enters Sunday’s series finale against the Houston Astros leading the American League at 2.53 and looking to extend another nice run. Hernandez has won five consecutive decisions and hasn’t lost since May 25. He’s had four no-decisions in that span, in which Seattle scored four or fewer runs three times.

The Mariners, one of the hottest-hitting teams in the majors over the past two weeks, eked out a 4-2 win over the Astros Saturday although they only had one hit, a two-run double by Michael Saunders in the seventh inning that snapped a 2-2 tie.

Hernandez will probably need more than that to beat the Astros, bad as they are. He will oppose Jordan Lyles, who has to be considered as close to an ace as Houston has, given that he has a winning record (4-3) on a team headed for 100 losses.

If the Mariners win Sunday, they will have back-to-back series sweeps (previously the Angels) for the first time since Aug. 17-22, 2012, when they broomed Minnesota and Cleveland in consecutive three-game series.

The 27-year-old Hernandez, in his ninth major league season, all with Seattle, will make his 21st start and second against the Astros. Hernandez, who pitched one scoreless inning in Tuesday’s All-Star Game, is coming off back-to-back victories over Boston and the L.A. Angels, giving him 10 wins before the All-Star break for the first time in his career. Hernandez not only leads the AL in ERA, he leads the majors in innings (138.1).

The 22-year-old Lyles, a Hartsville, SC., native in his third major league season, all with Houston, will make his 15th start and second against the Mariners. Lyles, with two losses and two no-decisions in his past four outings, has not won since June 18 when he defeated Milwaukee 10-1. Lyles has pitched into the seventh inning in six of his starts. He recorded 10 strikeouts the last time he faced Seattle.