After scoring 26 runs in the just-completed Houston series, the Mariners will host the Indians, who beat the Mariners four in a row at Cleveland last May. 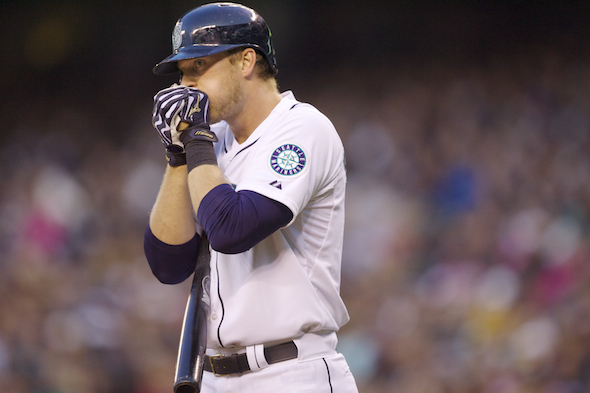 Michael Saunders, who has a 10-game hitting streak, and the Mariners have won a season-high six games in a row (two sweeps) and will begin a three-game series with Cleveland Monday night at Safeco Field. / Drew Sellers, Sportspress Northwest

The Mariners have put together a significant (for them) run lately, winning six in a row (consecutive series sweeps) to move within six games of .500 for the first time since May 21. Given the current offensive splurge, when the Mariners look back on 2013 they are bound to rue many missed opportunities, particularly a stretch from May 17-25, when they lost eight consecutive games, including three by walk-off in a four-day span.

Cleveland administered those forehead-slappers as part of a four-game, Lake Erie series sweep. The Mariners then lost a pair in Anaheim to the Angels and three of four to Texas at Safeco Field, falling 12 games out of the division lead. They still haven’t recovered in terms of the AL West race, sitting 11 games out despite the win streak, as they get set for a seven-game home stand, starting with the Indians Monday.

But the offense has recovered. The Mariners scored 26 runs in the Houston series and are getting production throughout the lineup (even if it came at the expense of the lowly Astros). Now that the offense appears on track, Aaron Harang needs to follow suit.

Harang will make his 16th start Monday. He’s had two complete-game wins but a half dozen clinkers, including his last start when Boston battered him out of the ball game. Harang will oppose Ubaldo Jimenez, who fanned nine the last time he saw the Mariners. A closer look:

The 35-year-old Harang, a San Diego native in his 12th major league season and first with Seattle, will make his 16th start and first against Cleveland. The erratic Harang has been on a good outing-bad outing roller coaster since mid-June and has recorded only two victories since May 27. Harang had one of his worst outings in his last start, when he allowed seven earned runs in 5.0 innings in a loss to the Red Sox.

The 29-year-old Jimenez, a Dominican in his eighth major league season and third with Cleveland, will make his 20th start and second against Seattle. Jimenez has recorded just two decisions in his past six outings, both wins. He has a habit of short outings: he has pitched into the seventh inning just three times.