During the seven-game winning streak, the Mariners have outscored opponents 46-21 with their starting pitchers recording a 1.71 ERA.. 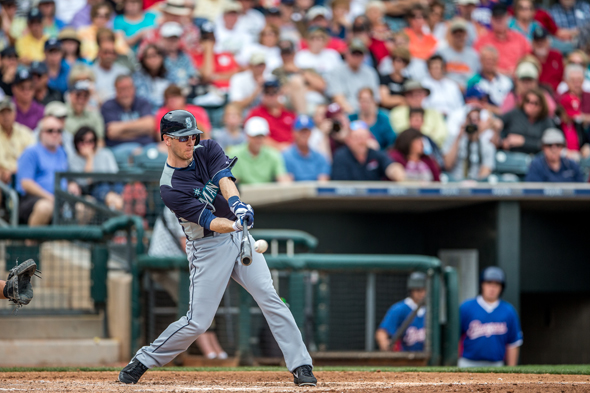 Michael Saunders and the Mariners take on the Cleveland Indians Tuesday in the second of three games at Safeco Field./ Drew McKenzie, Sportpress Northwest

It has been a long time — 2009, in fact — since the Mariners last produced a decent record (15-10) in the month of July. Back then, with Russell Branyan banging (31 homers), Ichiro at the apex of his slap-hitting prowess and Felix Hernandez en route to a career-high 19 wins, the Mariners won 15 times in 31 days. The surge helped Seattle to a 85-77 record, its last winning season.

Seattle didn’t do a whole lot to add to those numbers Monday night at Safeco Field, squeaking out a 2-1 win over the Cleveland Indians behind solo homers from Kendrys Morales and Mike Zunino and seven effective innings from Aaron Harang.

But the Mariners extended their winning streak to seven games, longest in the majors, and moved to within five games of .500 for the first time since May 20.

To match the longest winning streak since late August 2012, the Mariners will entrust Erasmo Ramirez with the ball Tuesday in a milestone marker on the calendar — Game #100. Ramirez, shelled in his first outing nearly two weeks ago, will oppose Zach McAllister, just coming off the disabled list. A closer look:

The 23-year-old Ramirez, a Nicaragua native in his second major league season, both with Seattle, will make his second start and first against Cleveland. Ramirez missed the first three months with an elbow issue and, in his return to the majors, lasted just 4.2 frames with a no-decision against Boston. Over the All-Star break, Ramirez pitched a game at A Everett in order to maintain his routine.

The 25-year-old McAllister, a Chillicothe, IL., native in his third major league season, all with Cleveland, will make his 12th start and second against the Mariners. This is McAllister’s first outing since June 2, as a right middle finger sprain kept him on the DL for more than a month. Thursday, McAllister successfully utilized all his pitches in a quality start for AAA Columbus.