A 4-3 winner over Cleveland Tuesday, the Mariners have a chance to win their third consecutive series Wednesday, a feat they haven’t accomplished since the 2003 season. 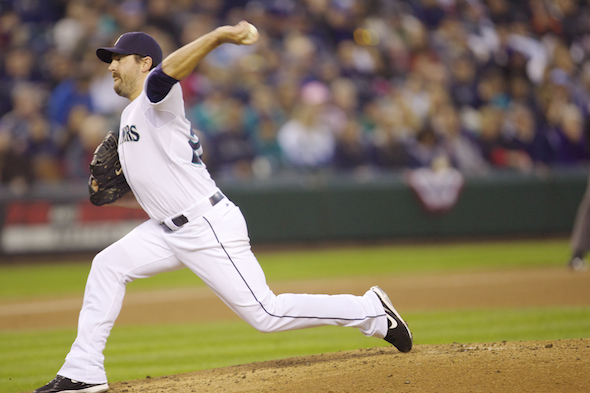 When, after lengthy consideration, the Mariners elected to shorten the fences at Safeco Field last offseason, they obviously hoped to increase their home run production. But they could not have expected that the rise in long balls would be so dramatic. The Mariners have swatted 56 homers at Safeco this season, 1.1 per game, exactly their total in 81 home dates last year.

The Mariners have also homered in 16 of their past 17 home games. When the Mariners reached 16 in a row, they established a Safeco franchise record that stands in vivid contrast to the old mark, 11, during the 1999 season when mashers Ken Griffey Jr., Alex Rodriguez and Jay Buhner populated the lineup.

The increased pop in Seattle’s lineup, coincidentally or not, corresponds to the best stretch of the season for lefty Joe Saunders, who enters Wednesday’s game with the Cleveland Indians riding a four-game winning streak dating to July 2.

The Mariners, a 4-3 winner over Cleveland Tuesday night without the benefit of a home run, can extend their winning streak to a season-high nine games and sweep their third consecutive series after not sweeping any in their first 30. It would be a rare achievement.

The last time the Mariners posted three consecutive sweeps: May 27-June 5, 2003 at the expense of Kansas City (2 games), Minnesota (4) and Philadelphia (3). Jamie Moyer, Freddy Garcia and Gil Meche each posted two wins during those sweeps and Kazuhiro Sasaki had three saves.

The 32-year-old Saunders, a Fairfax, VA., native in his ninth major league season and first with Seattle, will make his 21st start and second against Cleveland. After dropping a pair June 19 and June 25, Saunders has reeled off four consecutive victories, lowering his ERA  from 4.80 to 4.24. In those four wins, Saunders allowed five earned runs while striking out 18 and walking six.

The 29-year-old Kazmir, a Houston native in his ninth major league season and first with Cleveland, will make his 18th start and second against the Mariners. Kazmir, who joined the Indians this year after a long stretch with the L.A. Angels, rarely records a decision. He’s had two, both wins, in his past seven outings. He had his best start June 26 against Baltimore, holding the Orioles to one earned run in 7.0 innings.