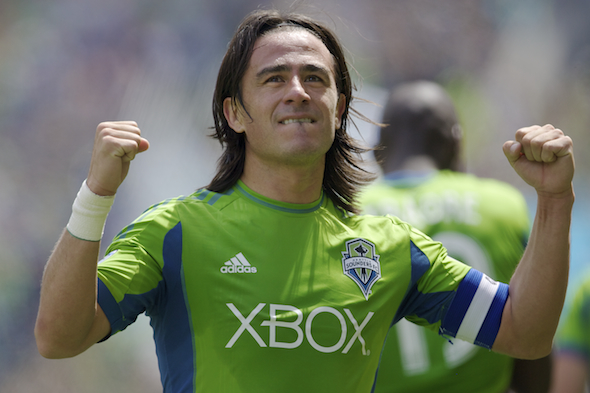 A win or draw by the Sounders Sunday against Chivas USA would match the franchise record (eight) for longest home unbeaten streak — a nice enough feat, except that Seattle sits seventh in the Western Conference seven points removed from the fifth and final playoff spot. Good thing it’s Chivas coming to town instead of, say, the LA Galaxy.

Chivas, the MLS equivalent of a scratch post, is last in the West with 17 points after starting the season with three wins in its first five matches. The Sounders traditionally dominate the Goats and will be looking to extend to 10 their unbeaten streak against them. Seattle has not lost to Chivas since June 6, 2009, going 5-0-4.

Across all competitions, Seattle is 5-2-4 against Chivas with a +8 goal differential. The Sounders have scored multiple goals in five of the past eight meetings and posted four shutouts in 11 all-time meetings.

Chivas, which recently endured a 14-match winless streak, would normally serve as an easy launch into a favorable stretch of Seattle’s schedule, which continues with FC Dallas and Toronto FC.

Seattle is a combined 15-4-9 all-time against Chivas USA, Dallas and Toronto in MLS play, and has unbeaten streaks of at least four matches against all three foes. While the Sounders routinely pound Chivas, the Dallas series is similarly lopsided, Seattle going 5-1-4 overall, including an unbeaten stretch of 4-0-1 since May 25, 2011. The Sounders have not lost to Toronto since April 25, 2010, winning all four meetings.

Potentially compromising Seattle’s favorable slate is the injury situation, plus the absence of forward Eddie Johnson, on assignment with the U.S. Men’s National Team Sunday in Chicago. For Seattle’s last match, against Colorado, nine players were either unavailable or affected by injuries.

“We have to keep working,” said coach Sigi Schmid “We know where we’re at. We’re still trying to get our best 11 on the field at the same time and get them to work together. Hopefully at practice we can get that a little more, and as guys return from injuries we can get closer to that.”

The Sounders list numerous players as either out or questionable for Chivas (see below), including goalkeeper Michael Gspurning and midfielders Alex Caskey and Shalrie Joseph, all out. Midfielder Andy Rose and defender Djimi Traore are questionable. Traore started 16 consecutive matches before he was sidelined for the Colorado match.

Although defender Brad Evans (hip) is not officially on the injured list, he is also not in Seattle’s probable starting lineup. Schmid suggested he might not be ready until the Sounders play Dallas.

Forward Obafemi Martins, listed as probable, was accidentally kicked in the knee during Tuesday’s practice.

“Hopefully,” Schmid told reporters, “it won’t be anything serious.”

With so many injuries, Sounders GM and part owner Adrian Hanauer told reporters after Friday’s training session that the club hopes to make some additions before the summer transfer window closes Aug. 8. Last week’s decision to waive Sammy Ochoa freed up a roster spot and cleared salary-cap space.

“We are actively pursuing a couple of different angles,” Hanauer said. “But as you guys know by now, it’ll be done when it’s really done — signed, sealed and delivered. I’ve been doing this long enough to know that if you’re too confident in this stuff, it’ll fall apart on you. I’m hopeful that we’ll get something done, but I think ‘confident’ is a little too dangerous of an adjective.”

No current Chivas player has scored against the Sounders. Three current players – Tristan Bowen, Bobby Burling and Gabriel Farfan – have recorded one assist against Seattle.

To add to its woes, Chivas will be missing its most important player. Eric Avila, who started four straight matches after missing three in a row June 19-29 while training in Mexico with CD Guadalajara, will miss Sunday’s match through suspension after he was sent off after just 25 minutes vs. Toronto.

“We are losing one of the most important players for Chivas,” said head coach Jose Luis Real.  “To play without Avila is not easy.”

CHIVAS NOTES: The 14-match winless run by Chivas, which ended with a 1-0 win over Toronto, is tied for the third-longest winless streak in MLS history.

COMING UP: Sounders host FC Dallas Aug. 3 and play their following two on the road, at Toronto FC (Aug. 10) and Houston (Aug. 17).