Felix Hernandez threw one of his best games of the season Friday, but came away with a no-decision in Seattle’s 3-2 loss. Mariners and Twins play again Saturday. 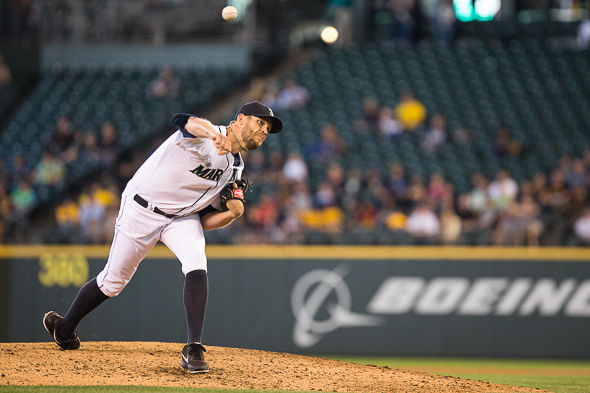 Tom Wilhelmsen, who has 23 saves in 28 chances, and the Mariners will take on the Twins Saturday afternoon at Safeco Field. / Sportspress Northwest

Due to Saturday night’s Seafair Torchlight Parade, plus the fact that it falls within FOX’s national broadcast window, Saturday’s Mariners-Twins game will not be televised, the only Seattle contest all season that will not appear on either ROOT Sports or FOX. The bad news is, Aaron Harang will pitch for the Mariners. There is always drama worth watching attendant to his outings.

Harang might throw a complete-game shutout, which he’s done twice (May 27 vs. San Diego, June 11 vs. Houston), or he might get lit up (six or more earned runs allowed four times). The only safe thing to say about Harang is that he’s all over the atlas when it comes to his starts.

In his last one, he held Cleveland to one earned run on four hits in 7.0 innings and won 2-1. In the start before that, he surrendered seven earned runs in 5.0 innings and lost 11-4 to Boston. His entire season has been that kind of whirlygig.

The Mariners, who took a hard-luck loss Friday night, 3-2 in 13 innings, don’t have much of a history against Minnesota starter Sam Deduno (two starts), but some might recall the 10-0 beat-down, with nine strikeouts, he put on them in August. A closer look:

The 35-year-old Harang, a San Diego native in his 12th major league season and first with Seattle, will make his 17th start and second against Minnesota. Harang allowed one run in seven innings against the Indians in his previous outing. The 35-year-old has struggled with consistency, but has given Seattle a quality start in three of his past four outings.

The 30-year-old Deduno, a native of the Dominican Republic in his fourth major league season and second with Minnesota, will make his 12th start and first against Seattle. Deduno pitched well against the Angels Monday, giving up two runs on four hits and five walks over 7.0 innings to pick up his sixth win of the year. The right-hander also turned in his seventh quality start in 11 outings.