The Mariners have lost three of their past four following an eight-game winning streak and will close out their four-game series with Minnesota Sunday afternoon. 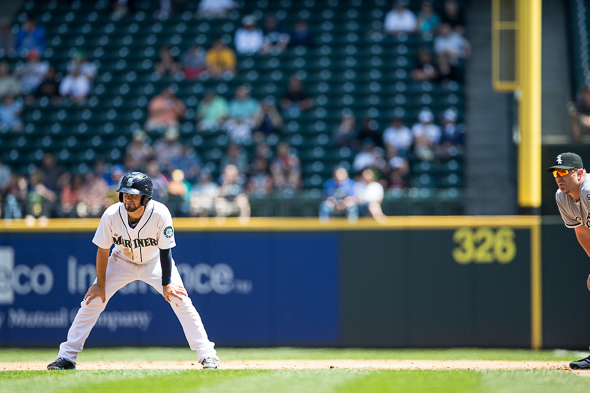 Since his major league debut May 27, Seattle’s Nick Franklin has 28 RBIs, most among American League rookies. / Drew Sellers, Sportspress Northwest

Three days ago, Nick Franklin swatted a two-run homer in the second inning against Minnesota that not only gave him eight for the season, but placed him in some rare company. In his 49th game, Franklin became the second American League second baseman in the past 75 years to hit at least eight homers in the first 50 games of a career.

Franklin joined Jason Kipnis (10 home runs for Cleveland in his first 50 in 2012) in the club, and only second baseman to hit more in 50 games was future Hall of Famer Joe Gordon — 11 for the 1938 Yankees.

Franklin didn’t homer Friday in his 50th contest, but he drove in Seattle’s go-ahead run against the Twins that staked Felix Hernandez to a 1-0 lead. Saturday, neither he nor the Mariners could generate any offense against Minnesota in a 4-0 loss at Safeco Field, but Franklin, since his major league debut May 27, has driven in 28 runs, most among American League rookies, and his seven go-ahead RBIs are tied with Raul Ibanez for the team lead.

Production from Franklin and even Dustin Ackley — batting .321 (9-for-28) since the All-Star break, including a pair of three-hit games — has helped put the Mariners into position for a run at a .500 or winning record when, a month ago, that seemed well out of reach.

RHP Erasmo Ramirez will be called upon to do his bit for the cause Sunday, when the teams wrap up the series at Safeco Field. Ramirez, awful in his first start with a 13.50 ERA, recorded a jittery win in his second outing and Sunday will face Kyle Gibson, a rookie the Mariners have never seen. A closer look:

The 23-year-old Ramirez, a Nicaragua native in his second major league season and second with Seattle, will make his third start and first against the Twins. After a less-than-elegant return to the majors July 11 (13.50 ERA, 7 earned runs allowed), Ramirez settled down in his last start and pitched effectively for 5.2 innings and collected the victory.

The 25-year-old Gibson, a Greenfield, IN., native in his first major league season (debut June 29), will make his third start and first against the Mariners. Prior to his call up from AAA Rochester, Gibson went 7-5 with a 3.01 ERA in 92.2 innings for the Red Wings. Gibson made his first start June 20 and defeated Kansas City 6-2, allowing two earned runs in 6.0 innings. He didn’t pick up his second win until July 14 and is coming off a no-decision against the Angels.