The Seahawks fiesta on the first day of training camp was diminished by news that wide receiver Percy Harvin has a tear in a hip labrum that could require surgery. 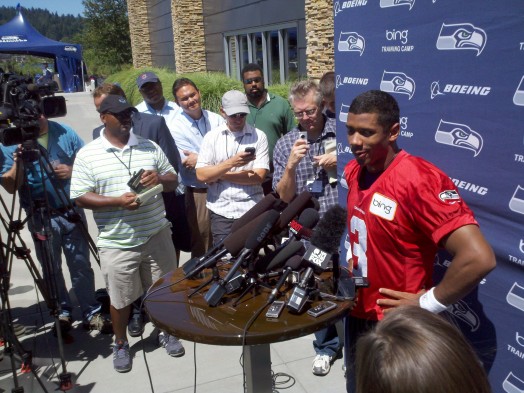 The media swarm descended on Russell Wilson and the Seahawks after their first practice for what many are forecasting as a Super Bowl season. / Art Thiel, Sportspress Northwest.

Despite hosting a festive, sold-out crowd perched on the grassy berm overlooking the practice field at the Virginia Mason Athletic Center in Renton, the Seahawks’ first day of training camp was marred by the news that wide receiver Percy Harvin has a hip injury that could require surgery.

Seattle signed Harvin in the offseason to a six-year, $47 million contract after he grabbed 62 receptions for 677 yards for the Vikings in 2012. A potential weapon as both a punt and kick returner, many felt adding Harvin as a deep threat was the last step the Seahawks needed to complete a stacked roster.

Coach Pete Carroll talked Thursday about Harvin’s status hours after NFL.com’s Ian Rapoport reported that the wide receiver has a slight tear in his labrum. The Seahawks listed Harvin on their physically unable to perform (PUP) category, a status that allows the Seahawks during preseason to fill his roster spot.

Depending on severity, a labrum tear could require rest, or an arthroscopic repair or full surgery, the latter requiring about two months of healing. That would sideline Harvin for all of training camp, the preseason and at least the first three games of the NFL season. In 2012, Harvin failed to complete the regular season, going on injured reserve when he tore a ligament in his ankle after appearing in nine games.

Carroll didn’t indicate if the injury Harvin sustained in summer workouts was as serious. He said Harvin will seek a second opinion before taking further steps.

“It may be. We’ll find out,” he said after practice. “We’re just going to go ahead and do it step-by-step right now. I know he was working at full speed just a few days ago.”

Traded in March for a 2013 first-round draft pick, a 2013 seventh-round draft pick and a 2014 third-round selection, the 2009 NFL Offensive Rookie of the Year is the type of dynamic threat that brings variety to the offense. In 2011, he rushed 52 times and gained 345 yards.

Harvin didn’t speak with the enormous collection of local and national media that gathered following a sunny, 2½-hour morning practice on the shores of Lake Washington. But quarterback Russell Wilson said he wasn’t worried about the possibility of Harvin missing training camp.

“Percy’s played in the league for several years now,” he said. “He knows football and understands the game. We talk all the time about certain routes. You don’t always have to get the reps to perfect them, as long as you are on the same page in terms of communication level.”

Good news for Seahawks fans was that guard James Carpenter seemed in sync with an offensive line from which he has been absent since suffering last December the second major knee injury of his NFL career. He underwent a cleanup procedure in the off-season, but said Thursday his knee feels healthy. He claimed he was in running shape — a significant development for a player that has struggled with conditioning.

“I’ve been hurt both years so I plan on playing this whole season,” Carpenter said. “I’ve got a lot to prove . . . so that’s why I’m working hard now.”

“I think today was a major success for him — to start practice, go all the way through individual, and then go through all the different periods,” Cable said. “Starting tomorrow, he’s really back then. He’s growing like everybody else.”

Continuing to grow too, is the national spotlight affixed on a Seahawks team that enters the 2013 season with the highest expectations in franchise history. Cornerback Richard Sherman appears on the latest cover of Sports Illustrated, and many rightfully consider Seattle’s defense among the NFL’s best.

“We don’t really worry about the outside expectations,” Wilson said. “Obviously our expectations are high itself. We don’t have have to worry about what everybody else is saying.”

Sherman, meanwhile, was predictably excited about staying in the spotlight.

“Anytime you make the cover of Sports Illustrated you don’t care what your picture looks like,” he said.

Nor did he shy away from preaching the same underdog message he outlined in his inaugural column for Peter King’s new website for SI.com, Monday Morning Quarterback.

Notes: Tight end Zach Miller missed the first day of the season with what Carroll labeled a “sore foot.” Miller hurt the same foot late last season, but Carroll said it was a different injury . . . Also sitting out with a foot injury was backup running back Robert Turbin . . . Defensive end Chris Clemons is able to run, but isn’t participating in practice until the torn ACL in his knee, injured and repaired surgically in January following  the playoff win over Washington, is fully healed. That likely will be after the start of the regular season.