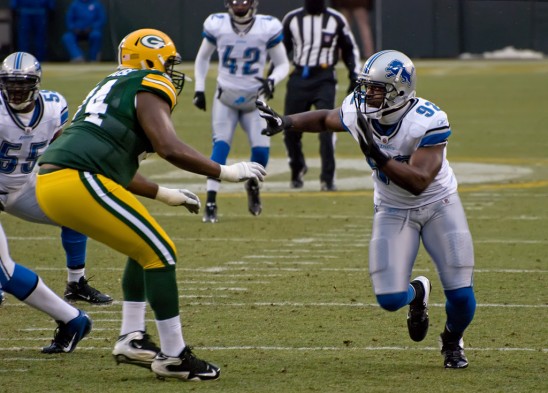 No disrespect to Percy Harvin, but DE Cliff Avril was the Seahawks best addition. / Detroit Lions

For a franchise traditionally free of pedigree, pretense and championships, the Seahawks sure picked up a lot of preseason accolades. They didn’t quite win the Super Bowl in July, but are coming as close as any team in club history. Cornerback Richard Sherman played and talked his way onto the cover of Sports Illustrated, and quarterback Russell Wilson is the favorite plush toy of football-loving America.

But before coach Pete Carroll could even begin his first punctuation-free sentence of the season, the Seahawks were a man down. Star newcomer Percy Harvin, who cost the Seahawks three draft picks and $25.5 million in guaranteed money, came up lame this week and may be in some health trouble with a hip labrum that is torn.

Surgery is possible. Because the Seahawks are national darlings, word shot around the NFL so fast that it turned many tweeters into doctors.

Percy Harvin yet to finalize 2nd opinion on hip, with that process ongoing. If surgery required as 1st Dr. recommended likely season ending

There’s the diagnosis, straight from  . . . wherever. Besides setting the NFL record for shortest term of darlinghood, the Seahawks will close on the mark for quickest to be scorned, dismissed and otherwise relegated (Leader: New England Patriots).

But before you pack away your facepaint, consider that the Seahawks are contractually obligated to play the season. The first day of camp brought positive news as well, destined to linger longer than Harvin’s pending half-moment in the Seattle sun.

MVOSA (Most Valuable Off-Season Addition)  — Defensive end Cliff Avril. With apologies to Harvin, he was a luxury, not a need. A pass rusher was a need. Avril was signed as a free agent in March after five years of studliness in Detroit, but his acquisition was overshadowed by the Harvin trade.

But defense-first Carroll, still waiting for his defense to knock down Falcons quarterback Matt Ryan in Atlanta, nearly had a giddyness overdose during Avril’s rollout Thursday.

“There were a couple of plays I saw,” he said, “and I couldn’t wait to go over and say, ‘You look great — it’s great to have you out there and compete with our guys.’

“He’s really fast. You know, he’s 260 pounds and he can run like that. He’s a great addition for us. We didn’t get much of a chance to really feel him in the off-season, so today was really the first day. He’s young enough (27) to be strong and really ready to go. He’s hungry enough to do so something and prove it here.”

As long as Carroll doesn’t knock down Avril like a Labrador greeting its returning owner, this should work out OK.

Nik Wallenda Pointless but Dangerous Exercise Award —  Left tackle Russell Okung. The man in charge of protecting Wilson’s valuable backside actually ran with the bulls in Pamplona, Spain. I didn’t get a chance to catch up with Okung to ask him if he failed to find the “Jackass” movie producers to film him skateboarding down Mt. Rainier’s Willis Wall.

Carroll was asked what he thought when he heard about Okung.

“Well, I like hearing that he made it,” he said. “I did ask him, ‘Did you really run with bulls? Did you run alongside of them?’

“I think he might have been running alongside the last bull.”

Isn’t running alongside the 49ers’ pass rusher Aldon Smith sufficiently thrilling? Or maybe Okung would just prefer to tell Wilson in the huddle, “Never look behind you. “

Tom Hanks Award — Defensive end Red Bryant. He never really got going last season as a run stuffer. Source of the problem was presumed to be plantar fascitis, a chronic foot soreness that limited his running.That was part of it.

Turns out he was sleepless in Seattle.

Doctors discovered he had sleep apnea, a disorder that interrupts and often halts breathing during sleep. It makes for a lousy night and a weak work day. Now he’s using a breathing device, eating better and claims to be a nearly new man.

Carroll said the Seahawks have stepped up their non-football help by devoting attention to players’ eating and sleeping habits.

“These guys, like a lot of us, don’t sleep very well without some support and some preparation,” he said.  “They leave it up to luck sometimes, and watch some TV in the middle of the night and don’t take advantage of the rest that they need. We are in tune with that . . . and Red is taking advantage of it. He looked good —  had a good first day.”

The Seahawks may be too good at bringing peace to the night. The Harvin news already has 49ers coach Jim Harbaugh sleeping better.