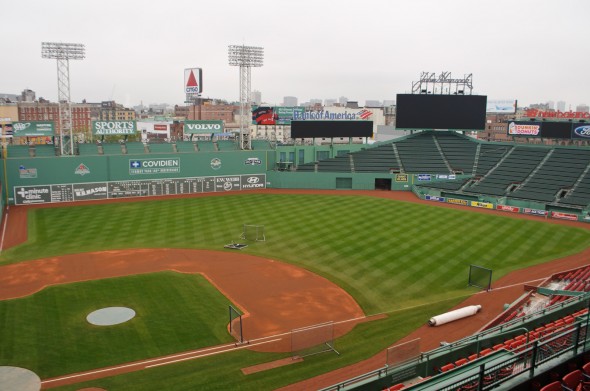 The Mariners begin a six-game road trip with the first of three at Boston’s Fenway Park Tuesday night. After Boston, the Mariners play at Baltimore. / Wiki Commons

The Mariners never have been able to get much done at their next stop, Fenway Park in Boston, where they have never swept a series or even won one since 2011. But if Joe Saunders is true to his history (and provided he doesn’t get traded) he will give the Mariners a chance in the first of a three-game set against the Red Sox.

Saunders is 5-2, 4.11 ERA in his career against Boston, which includes a 3-1, 4.60 ledger at Fenway. Whether Saunders can pitch to historical form is anybody’s guess given the nature of seasonal streaks.

The last time, July 24 at Safeco Field, ranked among his worst starts, with five earned runs allowed on nine hits in 4.2 innings. Bouncing back against the Red Sox, who are battling with Tampa Bay for the AL East lead, won’t be easy.

Saunders will face RHP Brandon Workman, who has made one appearance against Seattle, that in a relief role July 10 during an 11-4 Boston romp. A closer look:

The 32-year-old Saunders, a Fairfax, VA., native in his ninth major league season and first with Seattle, will make his 22nd start and first against the Red Sox. Saunders had a streak of four straight wins snapped in a rough start against the Indians Wednesday when he allowed nine hits and six runs (five earned) in 4.2 innings. He’d gone 4-0 with a 1.73 ERA in his previous four starts.

The 24-year-old Workman, a Bowie, TX., native in his first major league season, will make his third start and first against the Mariners. Workman, who made his debut July 10, is a product of the University of Texas. The Red Sox selected him in the second round of the 2010 amateur draft. Workman was effective in each of his first two starts, lasting a combined 12.1 innings while giving up four earned runs. He took the loss in his most recent outing, against the Rays, despite giving up just two runs over 6.0 innings.