Thiel: Plug to be pulled soon on NCAA’s power

The sound of NCAA revolution was in the air last week as football commissioners cranked up their dismay with the NCAA. The change has begun toward a pro sport. 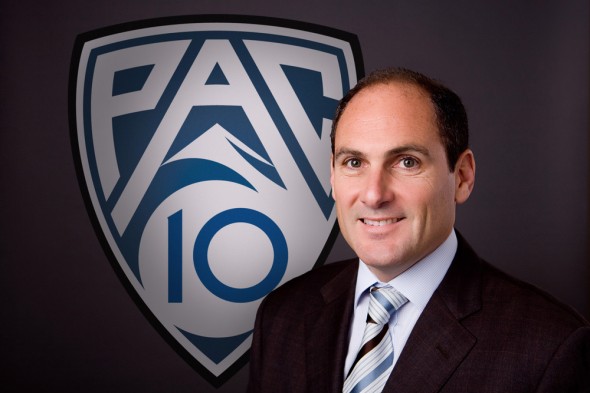 Larry Scott wants evolution instead of revolution in the pull-apart of the NCAA, but he may not get his way. / Pac-12 Conference

When commissioners of the five major college conferences use their annual football media-day hypefests to say they’ve had it with the NCAA, the coup d’etat is underway. The time of the NCAA’s control of big-time college sports is doomed. NCAA president Mark Emmert, whose tenure as strongman at the University of Washington now seems almost pastoral, had better get together his petition for asylum.

Hey, Edward Snowden, is there a vacancy at your Moscow hotel?

At issue, as always, is money. The Pac-12, Big 12, Big 10, Southeastern and Atlantic Coast leagues make a lot of the money off football and men’s basketball. The other schools among the 325 members of what used to be known as Division I? Not so much.

It’s been that way for a long time. But the big five conferences, newly intoxicated by immense amounts of TV network money, sense the time is right for an overthrow. Publicly, they cringe at such a term. But that’s nearly what is going on.

“It’s probably unrealistic to think that we can manage football and field hockey by the same set of rules,” Bowlsby said. “I think some kind of reconfiguration of how we govern is in order.”

Bowlsby and his brethren want a fresh set of rules for the big schools with GNPs the size of, say, France, and let the mom-and-pop shops compete among themselves. The bigs still would like to keep some aspects of NCAA governance, like having a guy with a tape measure make sure the football fields are 100 yards long and the hoops 10 feet high. But the big five are on their way, long-term, to outing themselves as the fully professionalized industry that they have been for the last 20 years or so.

“Unlike some of what you’ve heard (from other conference commissioners) this week, I believe we should be pursuing the strategy of evolution rather than radical overhaul,” he said in Los Angeles, calling the current discussion “too radical and too narrow at the same time. The answer from my perspective is not breakaway, but to evolve into something better.

“It’s been too narrow in that it’s solely focused on the NCAA and the governance process. Our discussions shouldn’t be merely about the institution but broader, focusing on the future shape of the college athletics, what it means to our fans and to our student-athletes.”

If this sounds a bit like a have-cake-and-eat-it-too to you, then you’re tracking well. The big schools are reluctant to go through the hassle and expense of becoming an independent country, so would be pleased to be part of an NCAA that kept the lights on, sewers flowing and the rats out of the kitchen. And they like the NCAA’s non-profit, tax-exempt status too.  Beyond that, they want to be left alone to go pro.

This may not seem like a big deal to fans of the Washington Huskies, Pac-12 fat cats who are more concerned with opening their shiny new stadium Aug. 31 with a bludgeoning of Boise State. But it is a big deal to Boise State, which since 1999 has a cumulative Division I record of 93-17 but is on its third conference in that time — fourth, if you count a year-long apprentice membership in the Big East Conference that did not include the playing of a game in that league.

The Broncos program is adrift, despite having proven the enterprise is more than capable of beating the big boys, including Washington, a 28-26 victim in the Las Vegas Bowl Dec. 22. But the school has had memberships in the Big West, Western Athletic and now Mountain West conferences, none of which are big enough to be a “have” in the schemes currently being plotted by the big five’s palace intrigues.

It may happen that Boise State joins by a big-five conference. Or, after lines are drawn, it could end up a have-not. That might inspire the Broncs to go North Korea on everyone, threatening, via litigation, nuclear extinction unless it gets a seat at the adult table.

The pulling apart of the NCAA is obviously also a big deal to Emmert, the Fife High School and UW grad who big-shotted his way to a nationally eminent position as leader of NCAA in November 2010 —  just when the revolution was picking up steam.

He has come under intense fire from within and without for his decisions and his operating style, particularly the mishandling of the Penn State and Miami scandals. NCAA employees have been reported to be fleeing, especially in the enforcement division, which Scott Thursday described as being at “an all-time low.” 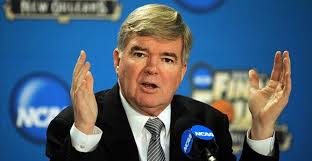 Mark Emmert is under big pressure as NCAA president. / NCAA

In a futile effort to maintain control, Emmert announced last week amid the cannon fire from commissioners that he is calling an unprecedented summit among all Division I schools in January.

If he were Don Coreleone, this would be a shrewd maneuver to get all his enemies in the same room to administer vengeance. He is not Don Corleone.

In an effort to stay ahead of the rabble, Emmert said critics of NCAA governance were right.

“There’s one thing that virtually everybody in Division I has in common right now, and that is they don’t like the governance model,” Emmert said. “Now, there’s not agreement on what the new model should be. But there’s very little support for continuing things in the governing process the way they are today.”

Which, for the crowd he will draw in January, is tantamount to putting a “kick me” sign on his back.

In truth, Winston Churchill in his prime could not have led the NCAA to enlightenment. So many longtime crosscurrents are mixing now, no president could do anything but be swept along.

The best example is the plan among the big five to accede to the growing pressure of funding players’ full cost of college attendance by paying scholarship athletes a $2,000 annual stipend.

That makes them professional, as has been the de facto case for years. But the stipend makes it inarguable that the college players are pros. Emmert is against it on principle, and a majority of Division I schools are against pragmatically — they can’t afford it. But the big schools who want to pay can only do it if they create a separate governance with new rules.

But the big five aren’t offering to pay players out of some combination of guilt and philanthropy. They’re doing it because the schools finally realize they could be in big trouble because of the Ed O’Bannon lawsuit.

The federal antitrust suit against the NCAA over the use of players’ names, images and likenesses, led by O’Bannon, the former UCLA basketball star, picked up momentum recently when it added six current college athletes as plaintiffs, including two football players from the University of Arizona. The action satisfied a request by a federal judge in order to certify the lawsuit and help make it a class action.

A growing consensus among legal experts is that the plaintiffs have a good argument that they were unfairly denied compensation for the use of their images. If the NCAA decides to settle before a trial, the cost could be in the hundreds of millions of dollars for thousands of past athletes in the class action. To keep the matter from reaching future athletes, NCAA lawyers may be laying pre-emptive groundwork by calling the $2,000 stipend a payment for use of images, and not wages. That would be a dubious claim, but at least provides a strategy.

However a judge may view it, the division within Division I over the stipend illustrates the complexity of maintaining the charade of amateurism. That is the unstated but significant part of the NCAA’s mission — protecting its access to free labor. College sports have for more than a century propped up the phony construct of amateurism in order to make money and profile for the schools on the backs of so called student-athletes in exchange for scholarships that have little value for many recipients.

That monumental hypocrisy is nearing the beginning of its end. But the transition to a more honest proposition is going to scorch a lot of the countryside. Coups are never pretty and rarely bloodless.