Clint Dempsey’s pending arrival is the big excitement, but with a win or draw against Dallas Saturday, the Sounders will have a club record (6-0-3) for longest home unbeaten streak. 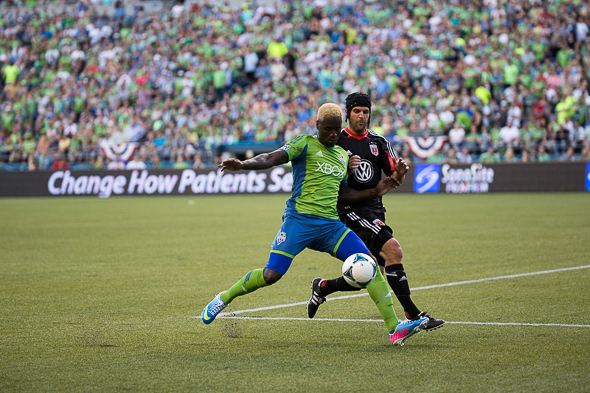 The Sounders will get a boost Saturday from the return of forward Eddie Johnson, just back from completing duty with the U.S. National Team. / Drew Sellers, Sportspress Northwest

Having disposed of Chivas USA Sunday, the Sounders (8-7-4, 28 points) continue their crawl back into the playoff picture Saturday with a match against FC Dallas. But if all goes well in final negotiations, the Sounders will have on their side Clint Dempsey, considered by many the best American soccer player. News of his pending acquisition electrified Seattle and U.S. soccer Friday.

His availability to play was suggested, but is unknown at least until the transfer from his EPL club, Tottenham Hotspur, is completed — for a reported $9 million, plus a four-year contract worth $32 million.

Dallas started fast with six wins in its first eight matches but has fizzled lately, winning just once in its past 10. With a victory, the Sounders would set a franchise record for longest home unbeaten streak (6-0-3).

Although still beset with injuries, the Sounders will benefit from the return of forward Eddie Johnson, who completed Gold Cup play with the U.S. National Team with two goals and one assist.

Johnson is not listed among Seattle’s probable starters — Obafemi Martins and Lamar Neagle are slotted at forwards — but head coach Sigi Schmid indicated this week, before theDempsey news broke, that he has not ruled out using Martins, Neagle and Johnson simultaneously as the club’s playoff push intensifies.

“I still think the possibility of all three of them being on the field together makes us a better team,” Schmid told reporters. “It makes us more explosive and harder to figure out.”

Sixth-place Dallas and Seattle repose just outside the playoff picture. Dallas is even with Vancouver on points but has one fewer win, while Seattle is four points from a top-five spot.

The Sounders have lost once in 10 all-time meetings with Dallas (5-1-4), and enters Saturday’s match with a five-game (4-0-1) unbeaten streak in the series.

Dallas is led by goalkeeper Raul Fernandez, who played in Wednesday’s MLS All-Star Game in Kansas City. Fernandez, a Peruvian newcomer who was voted to the Fan XI, has posted seven shutouts and ranks second in MLS with 75 saves.

Blas Perez, the starting forward for the Panamanian national team that lost to the U.S. in the Gold Cup final, will return to Dallas for the first time since July 7. Perez scored three goals with one assist in four Gold Cup matches, and leads Dallas with six goals.

Dallas has several other attackers, including Kenny Cooper, who scored 18 goals in 2012 with New York. Michel (1 goal, 5 assists) and David Ferreira (1 goal, 6 assists) add creative play from the midfield, and former University of Washington defender George John shores up the backline. Dallas also recently signed Brazilian defensive midfielder Erick, but he has yet to make an appearance.

Seattle’s injured list is shrinking. Three notables have been ruled out of Saturday’s match: MF Alex Caskey, GK Michael Gspurning and MF Shalrie Joseph, who signed a new contract with the club last week and is no longer listed as a designated player.

“That was something that was necessary for us to put ourselves in a position to add something significant to our team before (the transfer window closes) Aug. 8,” coach Sigi Schmid told KJR-AM radio Thursday as the Dempsey rumors swirled.

SERIES: Dates to May 16, 2009, a 1-1 draw, Seattle receiving its goal from Jhon Kennedy Hurtado. The Sounders have won five of the past six matches between the clubs across all competitions. In the last nine MLS meetings, Seattle has recorded 17 goals, Dallas 1o. The clubs last met May 18, Seattle coming away with a 4-2 win, sparked by Eddie Johnson’s two goals. The final meeting between the clubs is Oct. 19 in Frisco, TX.

COMING UP: The Sounders will hit the road for three of the next four matches, starting with a trip to Toronto next Saturday. Seattle will visit the Houston Dynamo’s BBVA Compass Stadium for the first time, and will conclude the month with a visit to the Columbus Crew Aug. 31. Seattle hosts the Portland Timbers in the next home match Sunday, Aug. 25.