The Mariners, who suffered two walk-off losses in Boston Wednesday and Thursday (actually on the same calendar day), open a three-game series at Baltimore Friday. 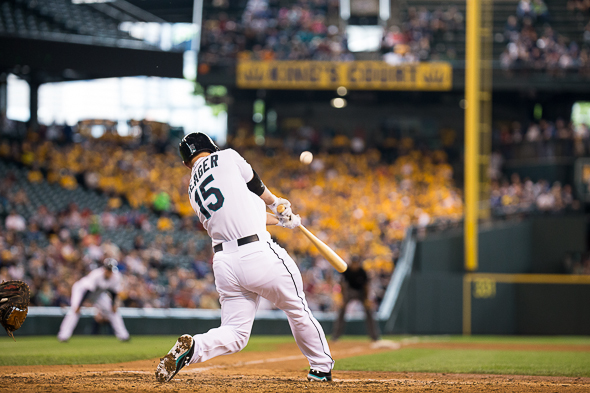 Before July slips too far into the rear view mirror (and the Mariners suffer another walk-off loss), it’s worthwhile to examine the month produced by Kyle Seager. Had Seager gone 3-for-4 against the Red Sox Wednesday, he would have finished July with a .404 batting average. A 3-for-5 would have given him a .400 mark. Alas, Seager “only” went 3-for-6 with a two-run homer (his 17th) to finish at .396.

The significance: Only eight Mariners ever hit .400 or better in a calendar month. Throw out Ichiro, who accomplished the feat an astounding seven times, and only two other Mariners did it multiple times, Edgar Martinez (4) and Alex Rodriguez (2).

Besides Ken Griffey Jr.,, who hit .400 in a month once, Joey Cora, Henry Cotto, Bob Kearney and Joe Simpson also did it once each, although how Cotto, Kearney and Simpson landed on the same list as Ichiro, Edgar, A-Rod and Griffey can’t adequately be explained.

Seager posted 12 multi-hit games in July, and also scored 21 runs with five doubles, six home runs and 14 RBIs. He’s a big reason why the Mariners ended July with 15 victories, the most they’ve had in a month since the past August.

Seager got this August off to fast start Thursday with a 2-for-4 effort with a run scored, lifting his batting average to an even .300, but that was eclipsed by the Mariners’ second walk-off loss in two days — actually one day, since their 15-inning walk-off loss in Game 2 of the series didn’t conclude until the wee hours of Thursday morning.

Seattle’s more stunning eighth walk-off defeat, in which Boston erased a 7-2 Seattle lead in the ninth to score an 8-7 victory, might not have occurred if King Felix Hernandez, cruising to his 12th win, hadn’t been pulled after a modest 107 pitches, leaving the outcome in the incapable hands of court jesters Tom Wilhelmsen, Oliver Perez and Yoervis Medina.

Or it might have been different if acting manager Robby Thompson, who wanted to replace Wilhelmsen with Medina, hadn’t raised his left arm first before tapping his right one. That meant, according to the umpire, he had to go with Perez instead, creating an unintended matchup of Perez vs. Shane Victorino, who slapped Perez’s second pitch for a two-run single. And it might have been different if Seattle’s Endy Chavez hadn’t stranded seven runners in his first three at-bats and eight in all.

It was a landmark loss in Seattle history and a rare win-of-its-kind for Boston. The Red Sox had won only three other nine-inning games in their history in which they were behind by five or more runs heading into the ninth: 1931 (vs. the Philadelphia Athletics), 1937 (at Cleveland) and 2007 (vs. the Orioles).

Inconsistent Aaron Harang is probably not the ideal candidate to pitch the Mariners out of their walk-off-loss dither, but he’s got the ball Friday night when Seattle opens a three-game series at Camden Yards in Baltimore, where a grim reminder of a five-year-old mistake awaits.

Harang will oppose RHP Chris Tillman, whose name should ring a faint bell, if not a loud one. On Feb. 8, 2008, the Mariners sent a package of five players, including top prospect Adam Jones, to the Baltimore Orioles for LHP Erik Bedard, a flop in Seattle. Jones has made three AL All-Star teams and Tillman is coming off his first. So the trade is officially now two All-Stars for Bedard, never an All-Star himself.

Tillman, selected by the Mariners in the second round of the 2006 amateur draft, is 4-0 with an 0.98 ERA against his former team (index finger down throat here) with an absurd 0.68 WHIP (now insert two fingers).

The 35-year-old Harang, a San Diego native in his 12th major league season and first with Seattle, will make his 18th start and second against the Orioles. Harang can throw a gem, but is equally likely to throw a clunker. Harang is a 4.89 ERA pitcher, but with two complete game shutouts. Since the All-Star break, the 35-year-old has allowed two runs in 12 innings.

The 25-year-old Tillman, a Fountain Valley, CA., native in his fifth major league season, all with Baltimore, will make his 22nd start and first against the Mariners. A one-time Mariner farmhand, Tillman was dominant his last time out against the Red Sox. The first-time All-Star right-hander gave up just two hits and struck out eight over seven scoreless innings to improve to 13-3. He won 10 of his past 11 decisions.