Harvin will have surgery; may miss 4 months 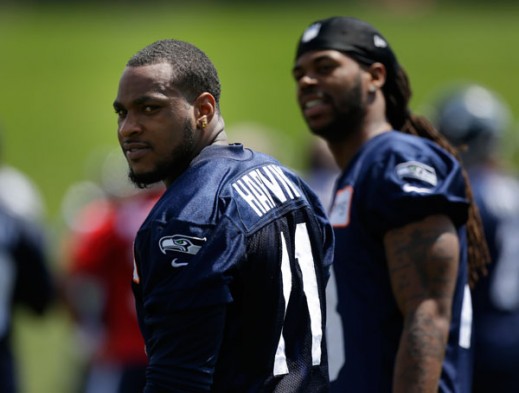 NFL.com is reporting that Seahawks WR Percy Harvin won’t be back to full strength until November, at the earliest. / Seahawks.com

The wait is over.

Seahawks WR Percy Harvin late Tuesday afternoon tweeted that the labrum in his hip will require surgery. NFL.com’s Ian Rapoport reported that Harvin could miss as many as four months, though there is not yet an official timetable for his return. Seahawks coach Pete Carroll Friday told USA Today that surgery for such an injury could sideline the 25-year-old for the entire 2013 season, although he later backtracked.

Grammar rules took a back seat as Harvin broke the news via his verified Twitter handle @Percy_Harvin.

Nobody was more anxious and excited about season then….but I will be back strong as ever..i appreciate all the love and prayers 12th man

Harvin traveled to New York to receive a second opinion from Dr. Bryan Kelly Tuesday,  several days after being evaluated by Seahawks team doctors. The co-director for the Center for Hip Preservation at the Hospital for Special Surgery, Kelly has operated on Philadelphia Phillies second baseman Chase Utley, New York Giants defensive end Osi Umenyiora and Boston Bruins goalie Tim Thomas. So pleased by the results of the operation was the goaltender that he thanked Kelly after winning the Vezina Trophy in 2011.

Per a Wall Street Journal story, Kelly and his team of surgeons most commonly use an arthroscopic procedure to correct a player whose femur grinds against the pelvis, causing damage to the labrum and tendons before eventually leading to arthritis. The arthroscopic procedure is less invasive and recovery time is reduced.

Carroll said earlier Tuesday the team expected to know more about whether Harvin’s injury within the next 24 hours.

Acquired in March from the Vikings in exchange for three draft picks, including a first in 2013, the Seahawks signed Harvin to a five-year contract extension worth a total of $67 million, $25 million of which is guaranteed.

Harvin played nine games for Minnesota in 2012, finishing the year on the injured reserve list after tearing an ankle ligament in a Nov. 4 loss to the Seahawks. Prior to the setback, he had 677 receiving yards by hauling in 62 catches.

Dr. Kelly will perform the surgery Thursday in New York.