The NCAA football arms race reached a new high (low?) with the unveiling of the University of Oregon’s Football Performance Center in Eugene. Fire the the photon torpedoes, Spock. 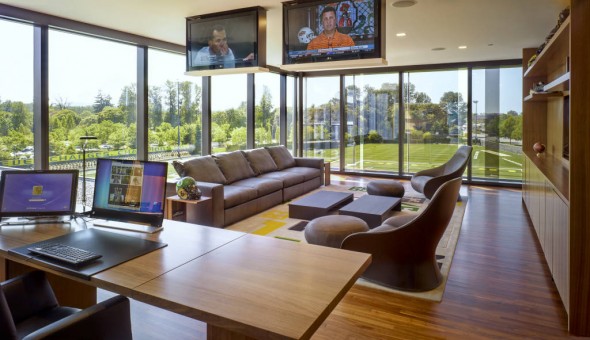 From Nike generalissimo Phil Knight’s coin jar, the Oregon Ducks have built a football facility that is a cross between a Vegas casino penthouse and the flight deck of the starship Enterprise. The adjective “opulent” fails, although another O word, “obscene,” has a first down in the red zone.

“People will complain, but this is not excessive,” Rob Mullens, the university’s athletic director, told the New York Times. “This is probably the most complete space in college sports.”

The Football Performance Center on the Eugene campus is a 145,000 square-foot tribute to expense without consequence. The original estimate of cost was $68 million, all provided privately by Knight, but officials aren’t offering up the final tally, probably because they don’t want to make Donald Trump jealous for losing the race for ostentatious overkill.

With materials, tools and art from around the world, the building is testimony to the extremes reached in NCAA football’s arms race, now fed by new millions from cable TV revenues.

Can’t wait for video of the media tour to become Exhibit A in the Ed O’Bannon suit against the NCAA, which is attempting to defend its status an organization devoted to “amateur” athletics.

The University of Washington will debut its answer Aug. 31 when the remodeled Husky Stadium, complete with its own football offices and training rooms, opens for business. The hope is that the Huskies answer Brazilian hardwoods with Indonesian teak.