In a stunning move, the Sounders are reported near the acquisition of Clint Dempsey, considered America’s best player, in a transfer from his Tottenham EPL team. 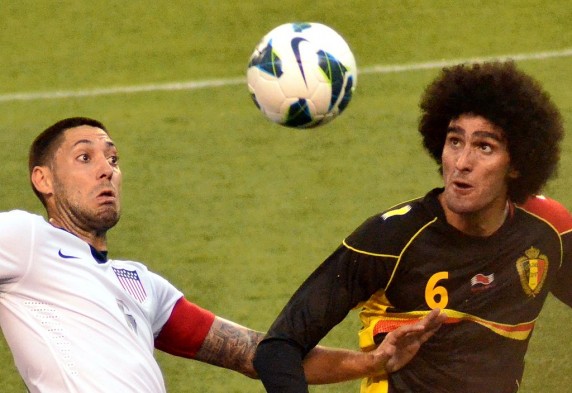 For a sport that pays most of its players teacher salaries or less, one guy is getting pro baseball player money. The Sounders reportedly are spending $41 million to hire Clint Dempsey: A $9 million transfer fee and and a $32 million salary over four years, according to NBC Sports’ ProSoccerTalk.

Nothing is official, but the Sounders are apparently unleashing the horde of cash they have sat upon after leading MLS in attendance for five years.

Tottenham Hotspur, the current club of the U.S. Men’s National Team captain, will receive a $9 million transfer fee, nearly the amount they paid Tottenham paid a year earlier to acquire America’s best player from fellow EPL side Fulham. And the salary is the largest base pay ever given to an MLS player, although David Beckham of the Los Angeles Galaxy received a percentage of the gate.

Earlier in the season, the Sounders spent $4 million to a Spanish club to get Nigerian forward Obafemi Martins from his Spanish club.

ESPN.com reported earlier that the man considered by many to be America’s best soccer was on the verge of making the leap back to MLS. Dempsey, 30, a seven-year veteran of the English Premiership,  would be the biggest signing in Sounders history and a stunning step forward for a team that has struggled with injuries and haywire lineups.

The teams are finalizing the transfer of the forward/midfielder, and Sounders officials were not making public comment. However, coach Sigi Schmid, on his weekly show on KJR Thursday, answered a question about a Dempsey signing by saying, “We’re always interested in good players . . . but right now there’s really nothing to it. There’s nothing to say.”

On Aug. 31, 2012, Tottenham signed Dempsey to a three-year, $9.2 million contract, the highest salary for an American player.  The deal brought him from Fulham, where he played from 2007-2012 and was club’s all-time leading goal-scorer and two-time player of the year. For Tottenham, he scored seven goals in 29 matches.

The pending deal coincided with a move announced Thursday that veteran midfielder Shalrie Joseph accepted a new contract that freed up a designated player spot. Earlier, the Sounders cut Sammy Ochoa to create roster space. Sounders general manager Adrian Hanauer acknowledged last week that he was working “very hard” to secure a top-tier talent before the close of the international transfer window Aug. 8.

The DP designation is free of salary-cap restrictions and allows the Sounders to pay whatever can be negotiated. The other two DPs are Martins and Mauro Rosales.

Rumors of the pursuit of Dempsey began Thursday with a tweet from a FOX Sports broadcaster that the Sounders were “interested in bringing Dempsey back to MLS in Seattle.” A photo of Dempsey at the San Francisco airport spread quickly through the Twitterverse, but he went to a gate where the flight was not bound for Seattle.

Then came word that Dempsey may have been negotiating with EPL’s Everton club, which was playing a match in San Francisco in the International Champions Cup. So he may have been playing offers against each other.

After last season’s playoff ouster, the Sounders came under fan criticism for a lack of dynamism from their DP selections. But pairing Dempsey with Martins, signed after the season began, would squelch that conversation and make the Sounders into a fearsome attack.

The Sounders are the MLS’s most financially successful franchise, with attendance up 2.8 percent this year to more than 40,000 a game.  MLS attendance is down overall three percent.  The No. 2 club in attendance, the Los Angeles Galaxy is drawing around 21,000.

Dempsey’s move to Seattle is surprising because with the World Cup pending in 2014, he said he wanted to play at the highest level. He didn’t indicate a desire to return to MLS, where he played with the New England Revolution from 2004-06 before being sold to Fulham in January 2007.

Dempsey grew up in Nagodoches, TX., and played in college at Furman University before being drafted by New England. Dempsey has 99 international appearances for the U.S., which he represented at the 2006 and 2010 World Cups. His 35 international goals are  second on the Americans’ all-time scoring chart.