The Mariners return to Safeco Field Monday night to face the Toronto Blue Jays in the first of three. RHP Hisashi Iwakuma will be looking for his 11th victory of the season. 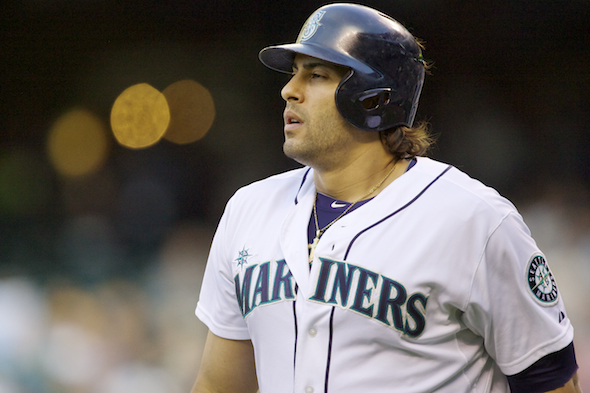 After a long stint on the disabled list, outfielder Michael Morse has quickly worked his way back in the Mariners lineup. Seattle, winner of two straight, hosts Toronto in the first of three Monday. / Drew Sellers, Sportspress Northwest

Aside from obvious choices Randy Johnson (four Cy Youngs) and Alex Rodriguez (three MVPs and about to get his comeuppance), only three former Mariners have won one of the major American or National League awards — MVP, Cy Young, Rolaids Relief, Comeback Player. Can you guess?

The first of the ex-Mariners to cash was Ken Griffey Jr. who, in 2005 with Cincinnati, won the NL Comeback Player of the Year award after suffering a spate of injuries that derailed his bid to become baseball’s all-time home run king.

Reliever Rafael Soriano, infamously dealt to the Atlanta Braves in 2006 for the worthless Horacio Ramirez, came next, taking the 2010 AL Rolaids Relief award after saving 45 games for Tampa Bay. Soriano recorded 156 of his 160 career saves with teams other than Seattle, which originally signed him as an amateur free agent in 1996.

Dickey departed Seattle after that season and has bivouacked since with Minnesota, the New York Mets and Toronto, his current employer. Dickey’s gig comes less than year removed from him claiming the NL Cy Young award for a season in which he went 20-6 with a 2.73 ERA in 33 starts.

Dickey has regressed significantly, sporting an 8-11 ledger as the prepares to face his old team, the Mariners, Monday night at Safeco Field in the first of three.

The Seattle team Dickey will face is coming off a weird road trip. Swept in Boston (two walk-off losses) and an 11-8 loser in the series opener in Baltimore Friday, the Mariners rebounded with consecutive victories to salvage a 2-4 trip.

Monday, they’ll receive Hisashi Iwakuma’s 40th career start. Coming off a no-decision in Boston, Iwakuma is third in the AL with a 5.54 strikeout-to-walk ratio, second with a 0.97 WHIP and sixth in ERA at 2.76 ERA.

The trending downside: Iwakuma has allowed 11 home runs in last eight starts after yielding zero in the four before that.

The 32-year-old Iwakuma, a Tokyo native in his second major league season, both with Seattle, will make his 24th start and second against Toronto. Since a five-game skid from late June to mid-July, Iwakuma has rebounded to go 3-0 with two no-decisions. He has allowed two earned runs in his past three outings, none in his last two.

The 38-year-old Dickey, a Nashville native in his 11th major league season and first with Toronto, will make his 24th start and second against Seattle. Last year’s National League Cy Young winner, Dickey had a strong outing during his last start against the A’s but was the victim of some sloppy defense. The Blue Jays committed four errors that led to a pair of unearned runs. Dickey took the no-decision but only allowed six hits and a walk. In his last five, the former Mariner has three losses and two no-decisions.